Dehler – A History Of Success

DEHLER has traditionally been a niche brand in Australia, but a closer examination of race results and the history of this enduring German producer shows it’s a brand well worth putting on any club racer’s list of potential yachts.

In the late 1950s the Wirtschaftswunder, or German economic miracle, was in full flight as the country recovered from the devastation of war. Willi and Edith Dehler were running a successful electrical shop and like many others at the time, looked for a way to reap the rewards of their efforts. Willi wanted to try gliding but Edith insisted he remain on terra firma – or at least on the water that covered it. So sailing was chosen and they bought a 4.2m long Stern dinghy which was moored in front of the Yacht Club Dortmund, which they had joined. Capsizing during their first sail did nothing to dampen their enthusiasm. 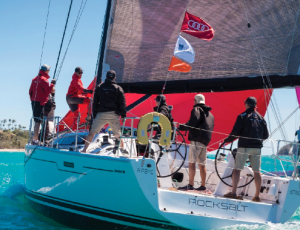 Innovative Dutchman, E.G. Ricus van de Stadt, the designer of the Stern, showed the Dehlers around his factory when they arrived in Holland to pick up their purchase. It was the beginning of a lifelong friendship, but more importantly opened the eyes of Willi Dehler to the potential of the new phenomenon from the United States – glass-reinforced plastic, or GRP. In Germany, boats were still made from traditional materials such as steel, aluminium and laminated wood. One of the few fibreglass boats in the country was the club’s tender, a beast of a thing that wouldn’t row straight and after a short time began leaking when the sprayed-on GRP began to delaminate. Willi Dehler could see the potential for building a better craft for his son Karl to race. He bought the drawings of the club dinghy, made a 1:1 wooden model and the corresponding negative mould himself and produced his first sailboat – named Winnetou after a popular cinema hero of the time. The club immediately asked whether he could make a second one for them to replace the useless tender. Of course he could – he already had the mould. Then other club members started taking an interest. What began as a hobby quickly grew into a business on the side. Production took place in one of the former foyers of a cinema in Dortmund, directly beside the electrical shop.

To get away from the pressures of running two businesses, the Dehler’s took a break to attend the International Boat Show being held in Friedrichshafen, on Lake Constance in 1963. They took along two Winnetou dinghies and a life-size cut-out of the cinema hero, which became a huge attraction for the crowds. By the end of the show they had taken 28 orders, growing to 50 by Christmas of that year. The Dehler boat yard was in fulltime business. The cinema was too small for the increased order book, so production facilities moved to a former dance hall. Seven staff were employed to hand-make the Winnetous, rolling the resin manually into the mould in cut-out mats and rovings