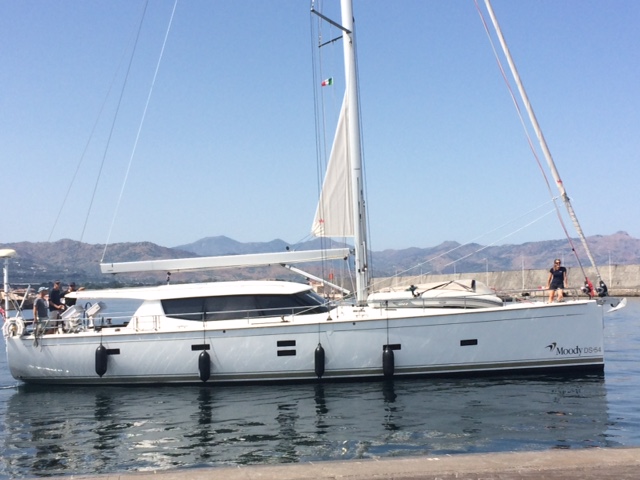 When Rick caught up with Andy for a cup of coffee little did he realise how just one simple question would lead to the start of his own exciting new venture, Calypso Expeditions, opening up the world of luxury cruising in idyllic destinations to everyone.

We chatted to Rick to find out more.

Rick, where did the initial idea for Calypso Expeditions come from?

In August 2014 I was up at Hamilton Island Race Week and having a chat with Andy Fairclough from Flying Fish. I knew Andy had spent 20-30 years sailing the world so out of curiosity I asked him: “What is your dream?”.

Andy told me he’d love to buy a boat in Europe, sail it back to Australia and sell passages along the way.

I thought it was a great idea and that’s how Calypso Expeditions came about.

What made you chose the Moody 54DS as the Calypso Expeditions luxury flagship yacht? 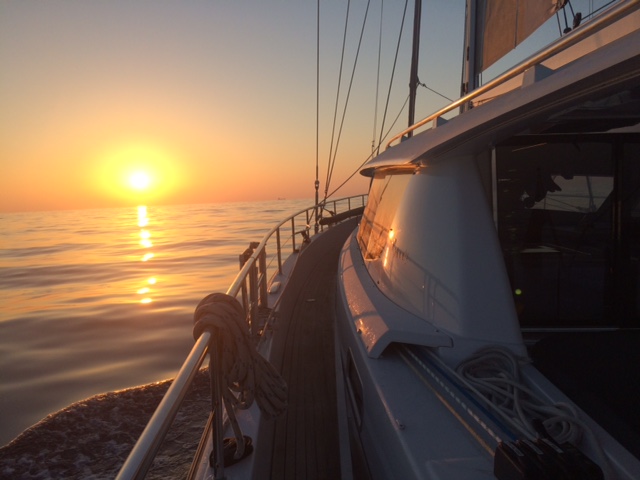 Once we’d returned to Sydney after the Hamilton Island Race Week was over Peter and Mary from Team Windcraft came into Flying Fish’s Sydney offices to see Andy.

As soon as Andy saw the Deck Saloon he immediately rang me to suggest it would also be a great boat for our project.

That very same weekend we enjoyed a test sail out on Pittwater.

It was a beautiful day, the Moody sailed beautifully… and I instantly fell in love with this great boat.

I knew I had to have one for myself. So in January 2015 Andy I formed a partnership.

We ordered a Moody 54DS…and Calypso expeditions was born.

Where did you get your MCA coding done on Calypso?

In July 2015 we took delivery of our wonderful new boat, and Ed Jones from Flying Fish came aboard as her full time skipper. We sailed from Germany down to Southampton, where we needed to get work done on it to get it fully MCA coded as a commercial vessel. 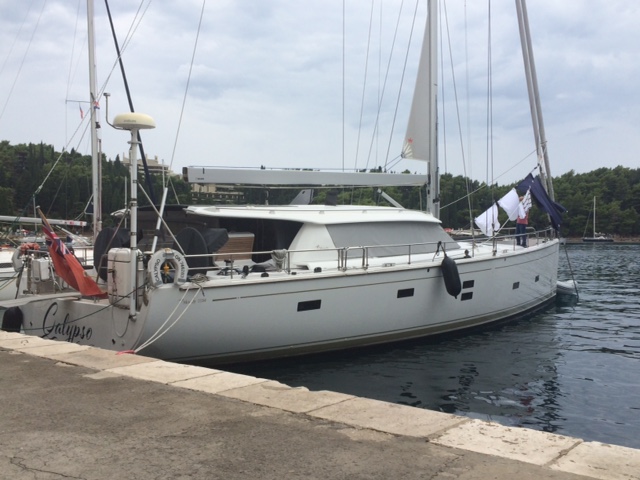 Our timing couldn’t have been worse!

We turned up at Southampton in the middle of Cowes week, the biggest regatta in the European calendar.

There were no trades available to do the work and it seemed there was no way we could get Calypso ready for our first paying passengers who were coming aboard at the end of September 2015.

Luckily, Geoff, the Moody agent in the UK, wanted to borrow Calypso for Southhampton Boat Show so we were able to do a contra deal, where he organised the relevant trades we needed in return for using the boat.

It was a huge win/win. Geoff received a huge amount of interest in the Moody 54DS and Calypso received the modifications required to make her MCA coded.

How did the very first voyage go?

When we took initial delivery of Calypso in Germany in August 2015 we sailed across the Baltic, which was very shallow, absolutely beautiful and dead calm. When you’re sailing at night in the Baltic suddenly in the middle of nowhere you’d come across a windfarm, all lit up like a Christmas tree. Quite a sight! 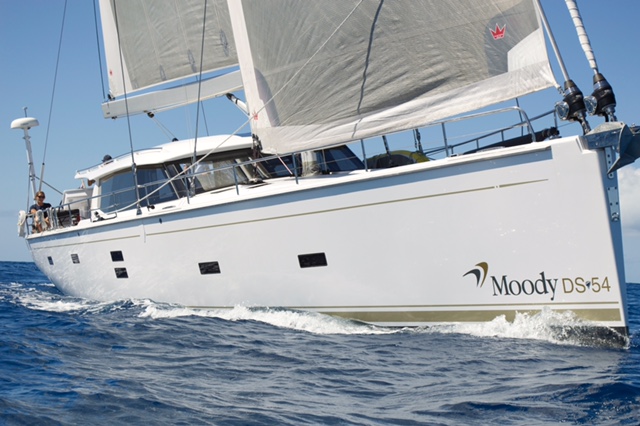 I was quite hesitant about the next leg, the English Channel, because of its reputation for messy seas.

I didn’t need to worry it was as flat as a tack, just like sailing in the Caribbean… but a bit colder.

We hit fabulous wind off Broadstairs, on the south coast of England, which is where my grandparents used to live and I remember playing there as a kid.

As I rounded the point I thought back to my childhood and wondered what would my grandparents make of this now? My grandmother never set foot on a boat in her life and here was I sailing the world in a luxury Moody 54DS!

Can you tell us about the ARC race and how Catriona came to join your crew?

At the end of Sept 2015 after we sailed across the English Channel we then went down across the Bay of Biscay and past France, Spain and Portugal. 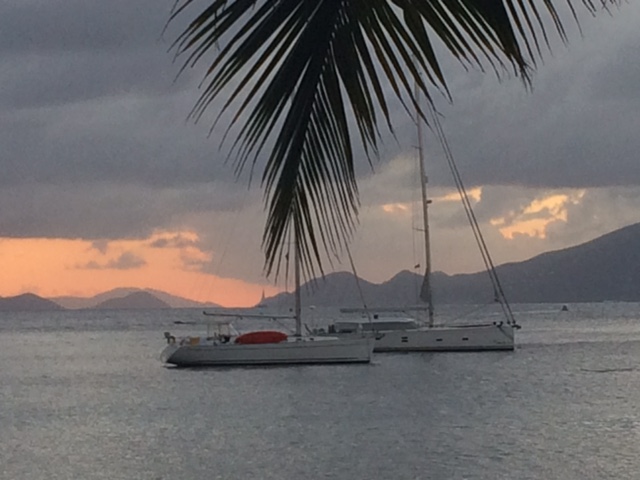 We had people hopping on and off and joining us at various stages across the Straits of Gibraltar and down to the Canary Islands, where we joined the ARC race.

Our skipper, Ed Jones, along with some of our guests, took 15 days to do the ARC race and a fabulous time was had by all.

Along the way a Scottish lady called Catriona hitched a ride in exchange for her deckhand services and when our guests caught some Mahi Mahi, Catriona cooked it up for them all.

So not only was Catriona a great deckhand, very precise and particular, but she also was a sensational cook and kept everything ship shape.

She never quite got round to leaving at the end of the ARC and is now also full-time on the boat!

What are some of your other sailing highlights on the Moody 54DS?

Where to begin! Beautiful does not even begin to describe the places we’ve been and the things we’ve seen.

Two months earlier this year I went out to Caribbean and spent 2 months around British Virgin islands, then headed to Antigua to compete in Antigua race week.

Just recently I’ve spent 3 absolutely sensational months on Calypso with various guests sailing from Palma to Palermo, in Sicily, and then through the straits of Messina down to Riposto, which is in the shadow of Mt Etna.

We then sailed from Riposto to Brindisi and then across the Adriatic to Dubrovnik, spending 5 weeks idyllically sailing between Dubrovnik and Split, exploring all the islands.

Then we retraced our steps back to Sicily, dropped off in Sardinia and Palma, and then the crew sailed it back to Gibraltar and down to the Canary Islands.

We wandered down narrow streets with marble paving in really old towns, such as Starigrad on the island of Hvar, which was founded by the Greeks in 400 BC.

We also visited the party capital of Croatia, Hvar Town, with a brooding castle built in the middle ages which sits right above the town and wraps its big walls around the town.

You can pull up to any of these places and they’re stacked with restaurants and fascinating places to see. Calypso gives you the freedom to spend wonderful days sailing from one place to the next and it just made the entire experience so incredibly easy.

Well we get up in the morning and just drop the swim platform at the back of the boat and jump in. Catriona cooks us whatever we want for breakfast and then we decide where we want to go that day. 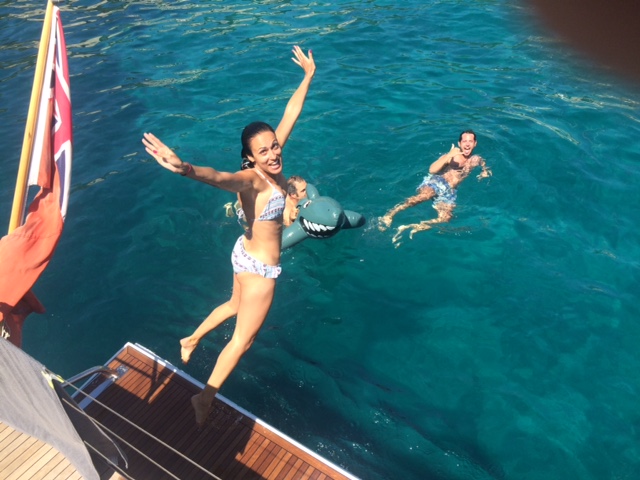 Usually we do 3-4 hours of sailing, having some lunch along the way and try to get to the next place by early afternoon so we can pick up a mooring.

In the evening we take the tender into the town and have dinner and explore or simply sit enjoying the sunset with a cool drink in our hand.

We’ve spent a whole year customising Calypso and we found the Moody 54DS really easy to adapt to our needs. Our upgrades include: water maker, additional storage, extra fridges and freezers, fire extinguisher systems and a spinnaker and pole for effortless downwind cruising.

We think she’s pretty perfect now…even if we do say so ourselves!

Where are you off to next?

On the 20th November 2016 we are competing in the ARC again with 3 paying passengers, Ed and Catriona and myself on board Calypso. We’ll sail south and the traditional way is to wait until the butter melts and then turn right and follow trade winds.

Having experienced these winds in the Caribbean in March and April of this year I know the sailing will be just fantastic as the winds are about 15 knots and they blow all day. 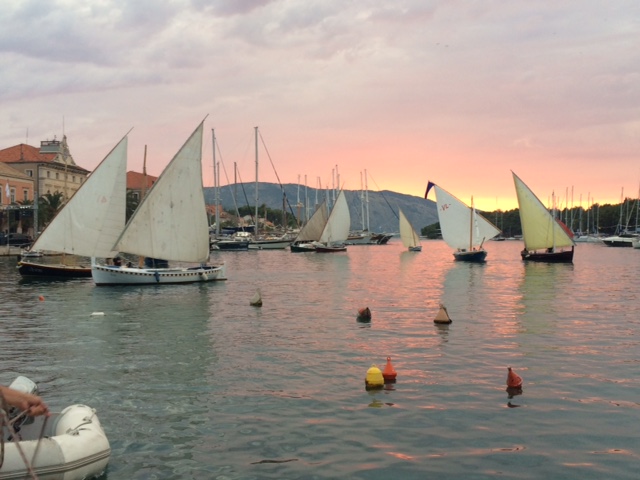 I’m really looking forward to a downwind sail—you just set the sails and do the watches.

Hopefully a couple of weeks later we’ll end up in Rodney Bay, St Lucia, where they say every boat is welcomed with a steel band and rum punch, no matter what time of night or day you turn up. And then it’s party, party, party!

What kind of passengers come aboard the Calypso?

Calypso offers something to everyone: people thinking of buying a Moody who want to test it out: sailors wanting to get their sea miles up or get their commercial ticket; families or couples wanting to jump on board and have a luxury adventure with a crew; individuals who want to participate in races; and diving and snorkelling enthusiasts.

We had a family this year who were thinking of buying a Moody so they did one week with the crew round the Croatian islands and had a wonderful time.

In the upcoming ARC race we have 3 individuals who have booked berths to experience the racing.

From a sailing school perspective the Moody is like a mini luxury cruiser, so a lot of the computer, auto pilot and navigation systems are what you would see on super yachts.

What are your favourite features of the Moody 54DS?

This boat is the ideal long distance family luxury cruiser because you can sail effortlessly without any hassle. It’s really like having a motor boat with a sail on it!

We love the unique 360 degree vision and the twin helm positions and it’s a great base monohull with true deck saloon.

I really think you would struggle to find another boat as good as the Moody 54DS or another boat that offers as much value. It’s an easy boat to enhance, upgrade or customise to your particular needs.

Bang for buck, this really is a fantastic design.

And for me, it was truly love at first sight. Learn more about Calypso Expeditions here