Seafaring Kiwis and Dominic Lowe who represents Windcraft Yachts have played a key role in the success of the Hanse brands current 8 series which is creating a considerable buzz in the sailing community.

A self-confessed nautical enthusiast, Dom has been sailing since he was 5 and has spent the last 23 years of his career immersed in the marine culture. Now, as owner of the brokerage Ocean Time he is the man behind Hanse in New Zealand.

I chatted with him about why the brand, and in particular, the recent 8 series is such a good fit for this boating mad country. 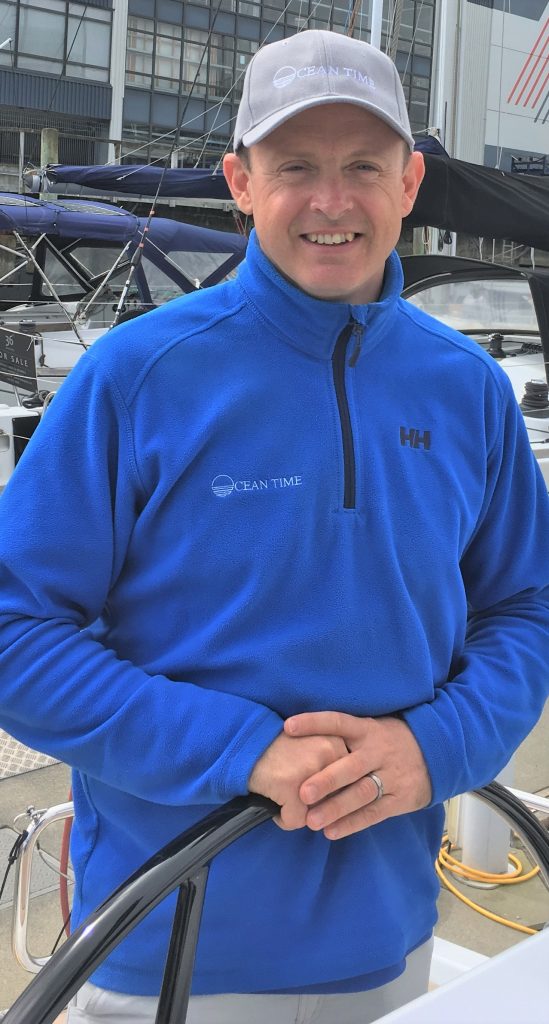 Dom, why are New Zealand sailors so well respected around the globe:

‘It’s no accident that we have the highest boat ownership per head of capita globally and there is no doubt that New Zealand has some of best cruising grounds in the world.

Kiwis have been born and bred on the water with most of the population living by the ocean.  And it’s more common than not, to have direct access to a boat.  Kids are in and around the water all the time and start boating from a young age meaning owners in their 60’s and 70’s have been sailing since they were in single digits, that’s 50-60 years of experience!

The culture is awesome, it’s an open playing field with no red tape.  And it’s an unspoken law that Kiwis have a right to be on the water to be enjoying fishing, boating and sailing – it really is a lifestyle.’

Hanse have boldly moved forward through innovation and technology yet remained true to their DNA.  They have researched where they can improve, and they have, in spades.  The bar has been raised considerably with the 8 series and here in New Zealand the results have blown away the competition.

There have been some radical changes and advances,  in fact the Hanse 548 is completely new from stern to stem.  True to the Hanse design criteria the 8 series perform well and look good.

Dom why do New Zealanders love the Hanse 548?

‘Kiwis have a tonne of experience and sailing performance is always front of mind.  They expect a boat to deliver, and the Hanse 548 does just that.

It’s a good fit because Hanse and the Germans are highly regarded for their performance and structural integrity.

We have sold a number Hanse 548s and owners are saying that they blow away anything they have had before – the performance, the layout, the T-Top and the VIP cabin.

Kiwis love to use their boat, often disappearing for 2-4 weeks at a time maybe more.  The 548 allows them to explore places like the Bay of Islands, Great Barrier Island or further afield offshore to Fiji.  It appeals to them for practical reasons such as hand holds, a well sized galley that can be used while under way and is of course a good layout for sailing.’ 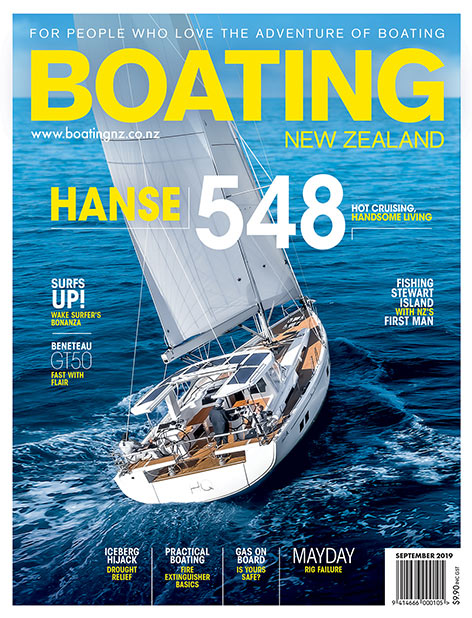 ‘I’ve noticed that New Zealanders are looking at bigger boats these days and the Hanse 548 fits that bill.

If you want a big boat and all the benefits such as stability at sea it must be easy to use short-handed and easy to manage when berthing.  The 548 has bow and stern thrusters so it’s easy to move side-ways and won’t get blown around and due its physical size and weight will take longer for the wind to act.  If a boat is a handful or marginal when sailing it will only be used in fair weather and Kiwis want to use their boats all year round, in all conditions.

It’s really no harder to sail the 548 than the 45-foot Hanse and that says a lot.  It’s more about a balance between the size you have and how often it’s used.’

Dom says, ‘sailing performance on the Hanse 548 has been optimised with a tall rig and a proportionally large sail.  It’s critical to balance the rig with plenty of ballast within the keel to make sure that the power from such a strong rig is transferred to forward motion rather than healing motion.  The result is a boat that likes to be sailed more upright and is fast.  And the new 8 series keel shape also means great upwind pointing abilities.’

The 548 ticks a lot of boxes and at just over 16 meters you would previously have had to buy a much larger boat to experience all the features on offer.

Dom, what do you see as the 7 main reasons the Hanse 548 has hit this sweet spot?

It’s fast, with beautiful lines and buyers can option and customise the features and the layout to suit their lifestyle which is a big plus.

1. T-Top: Creating an outdoor room in your cockpit

Dom is a big fan of the T-top cover over the cockpit which gives Hanse owners all year-round protection from the New Zealand winter, changeable weather conditions and in particular, the hot summer sun. The T-Top comes with a concertina canvas which is like a sunroof for your hard top – easy to pull out and slide back into position while underway.

Optional custom clears made either at the factory or locally in Auckland give owners warmth and protection while maintaining unobstructed views of their pristine waterways.  Dom says, ‘one of our owners said they felt so comfy and cosy one sunny winter’s day, that they had a swim – even though they got out fast!’. 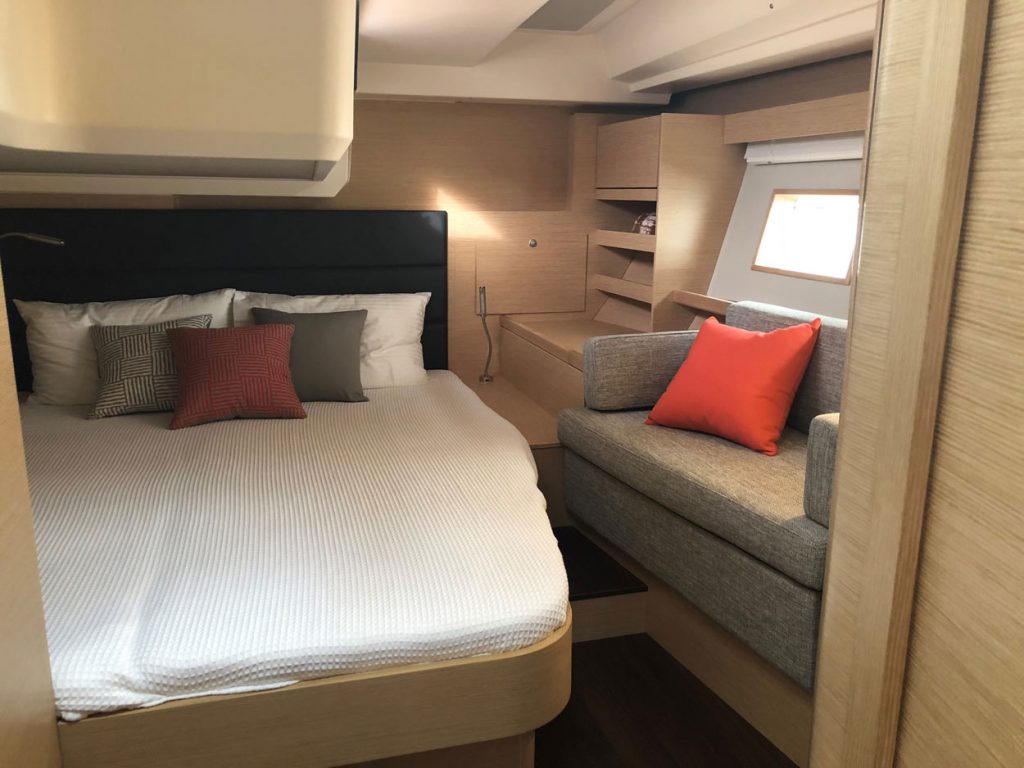 New Zealanders are known for holidaying overnight on their yachts with family and friends and the VIP cabin offers privacy and comfort for dual owners and guests.

This large aft to port master cabin with settee and optional en-suite has never been seen on a Hanse before so it’s an exciting addition, says Dom.’

Sailing the Hanse 548, it becomes easy to appreciate the addition of a second forestay furler for a larger overlapping genoa that works seamlessly with the trademark Hanse self-tacking headsail.  They can both be deployed or furled with the push of a button.

‘Both furlers are permanently set up on the bow.  Depending on the strength of the wind you can choose between one or the other.  This system is so much less complicated when sailing offshore in changing winds and ideal for short-handed sailing’, says Dom.

Dom says, ‘the minute you step aboard you can’t help but be impressed by the cockpit – a large uninterrupted space made possible by two separate tables that run parallel to  the port and starboard bench seating allowing clear access from the companionway to the twin wheels’.

He can easily imagine his boat owners entertaining 8 people then dropping the tables into daybeds to relax after a big feast.

A favourite area for the water lovers.  Take the set of moulded stairs from cockpit to the transom area leading to the bathing platform which sits at water level – no clambering down to the swim platform.  And the solid swim ladder sits at a 45- degree angle which makes the climb up or down from the water easy for all ages.

There is also a secret space behind the transom door – a large storage area for boat toys such as inflatable SUPs and fishing rods etc – how handy is that for access! 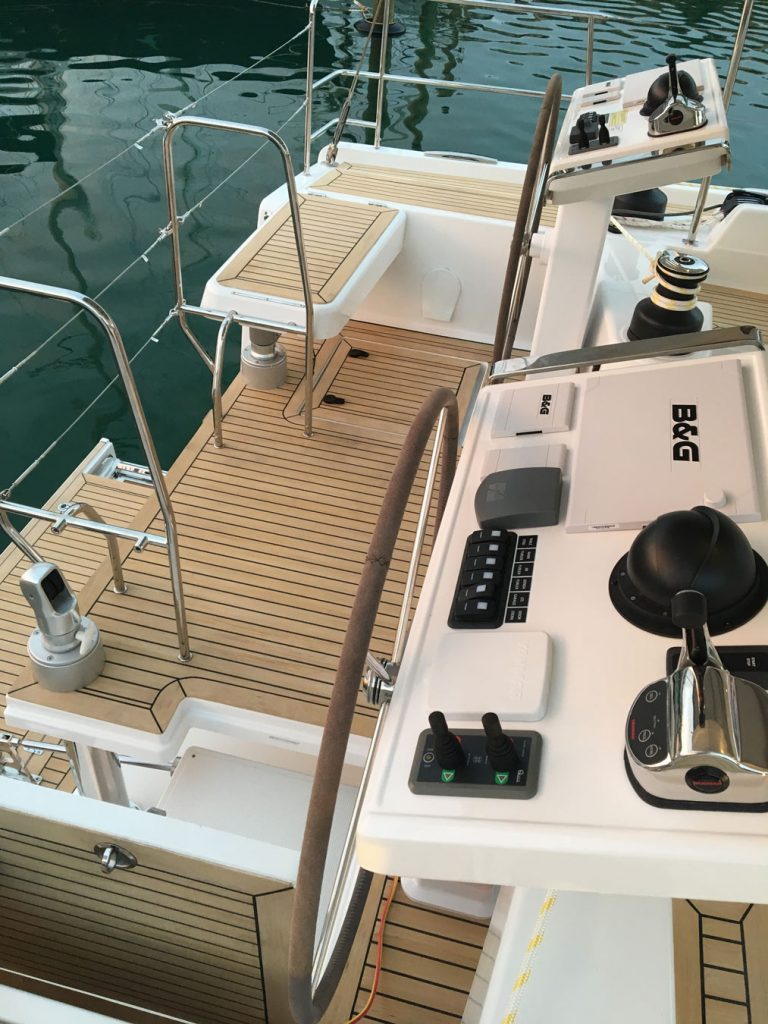 Telescopic transom davits are the perfect solution for a sleek yacht.

Dom says, ‘in case you haven’t seen them, telescopic transom davits are encased in a small discrete tube attached to the cockpit sole. They manually fold out the back of the boat for tender storage and pack away when not needed leaving owners with an unobscured view from the cockpit. 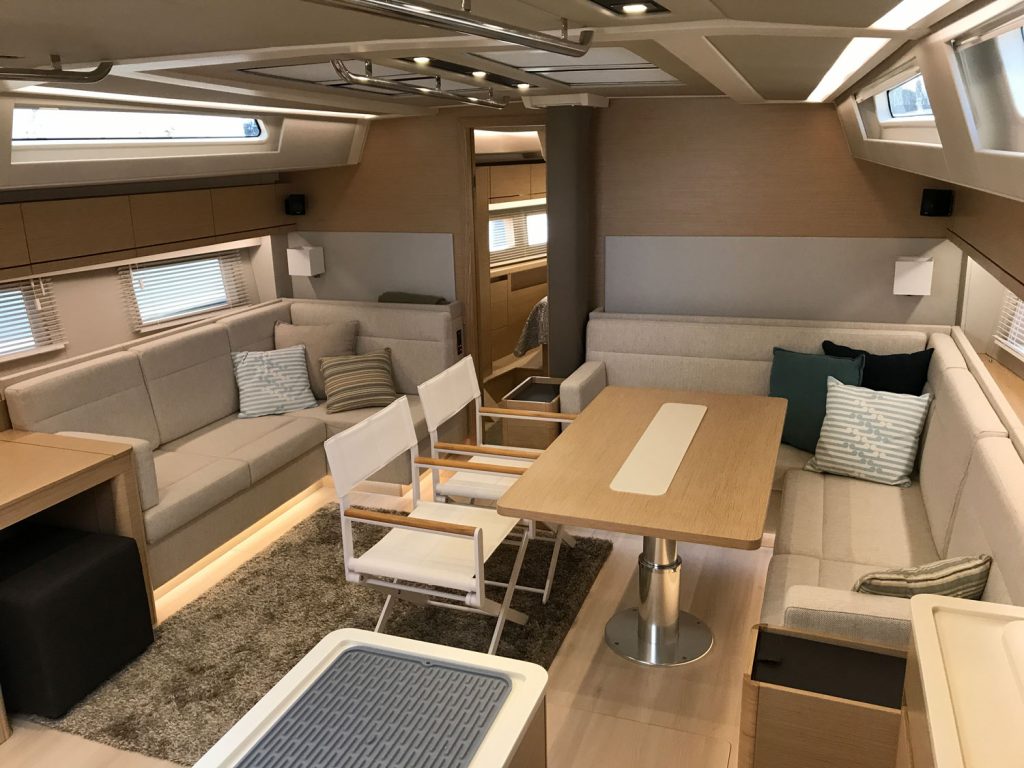 In Dom’s view, Hanse have really listened to feedback from owners of earlier models on interior finishes, fixtures and design.  They have re-created the interior with an abundance of natural light streaming in from large hull windows and many hatches.

For instance, the Hanse 548 now comes standard with:

The benefits of one dealership – Windcraft:

Dom what do you see as a strength in the way Hanse is sold in New Zealand?

‘Windcraft Yachts, New Zealand are the sole importer and agent for Hanse in the country and have been so since the brand was introduced here in the 90’s.

Collectively they cover all facets of import, sales, maintenance, support and backup.  Dom says, ‘we work cohesively as a team to provide an experience like no other for our clients during and after purchase.    And because OceanTime concentrate on only the Hanse group portfolio for new yachts, loyalty to my clients is a given.’

It’s clear that Dom has developed a stellar reputation within the yachting community and has become a trusted industry figure.  He is professional, knowledgeable and listens carefully to potential clients needs before helping them choose a suitable boat.   People know that the information they are given is accurate and that they can trust he is going to be there for them well beyond the handover.

The iconic annual Windcraft owners’ rally has been a significant factor in building a loyal community which is so key to the brands success.  Windcraft owners also love the goodbye winter, hello summer season get together at the Auckland on Water Boat Show (AOWBS).  These events give boat owners the opportunity to compete, network, socialise and swap stories about their own experiences and what’s going on within the boating world.

What’s next for Hanse in New Zealand Dom?

‘The strength and progress of the Hanse brands range now and over the last decade will be on display at the AOWB in the first week of October.

I am proud to be selling a European brand that is so well respected by Kiwi sailors.