They say you regret the things you don’t do… but is this Lunacy?
Lunacy is the name of Mat and Ally Shepherd’s new Hanse 445.

Why? Well is it crazy to sell your house, buy a yacht and plan a 6 month trip up the East Coast of Australia with 3 young children?

Or is it an inspired choice for a hard working couple who want to give their children an adventure and teach them life skills they could never learn in a classroom?

Are Mat and Ally smart because they understand that time with their young family is too precious to waste?

When we caught up with Mat and Ally they were full of smiles… the family are loving their time on the boat. Each day after school they head out for sunset sails and pasta.

The children are loving seeing the whales and dolphins and inviting their friends along for the ride. For Mat having his own yacht is a life long dream. He’s always sailed and when he was a kid he used to float different shaped pieces of wood in water to see which cut through the water best. He loves the sleek hull of his new yacht and Sunday racing is the highlight of his week. Ally loves the layout of her new floating home saying “it’s perfect for a family of 5”. We’ll be sure to let you know their dream sail up the coast goes. 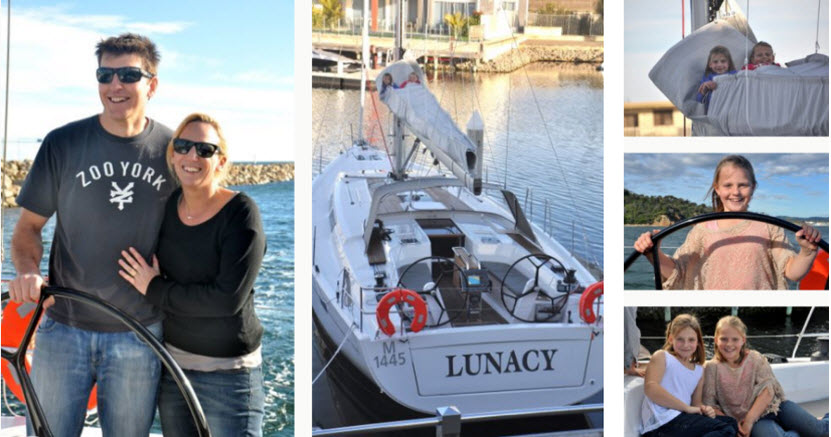 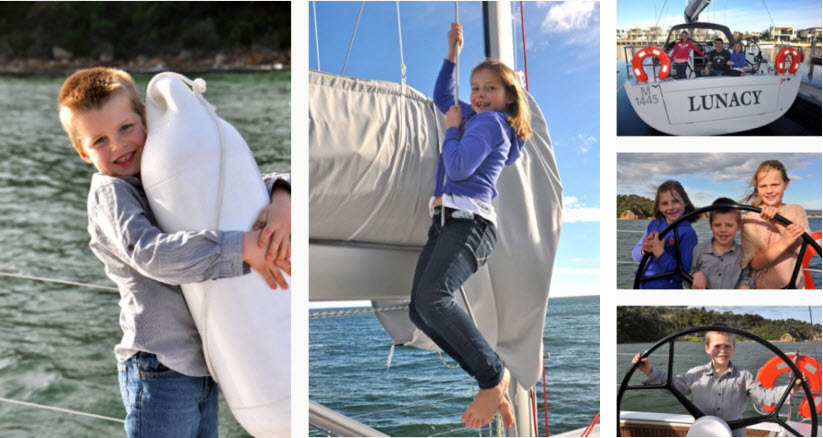 So far, the Shepherds’ 6 month voyage north along the east coast of Australia on their Hanse 445 has been jam packed with great sailing and adventures – plus some excellent fishing! Getting back to the real world after this is going to be tough! 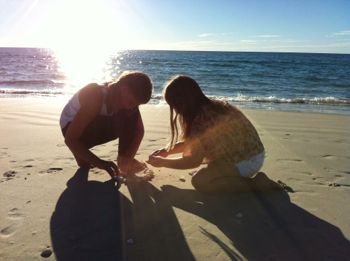 Since setting sail from Sydney at the end of March, Mat and Ally and their kids Summer, Holly and Paddy have enjoyed mostly good weather and good winds (sometimes a little too much wind!)… and it’s never a dull moment. In between sailing and fishing, the Shepherds have enjoyed swimming, surfing and snorkelling in clear, warm waters and pristine beaches, exploring on land, taking in the natural beauty and sights, catching up with friends and spending family fun days at local attractions and skate parks. 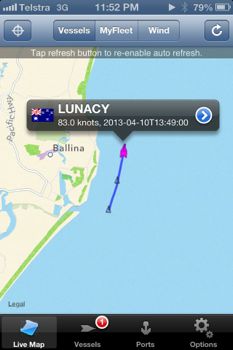 Here’s a roundup of their trip so far:

“We are having an absolute blast,” writes Ally, who is diarising their trip on Lunacy. After leaving Sydney they had a couple of nights at Shoal Bay and Fame Cove in beautiful Port Stephens. “We’ve done two overnight sails, which went well, with good weather conditions and even getting assistance from the tides.”

Further north, at Forster Tuncurry they enjoyed Easter with some surfing; “the Easter bunny even found us here, much to the kids’ amazement!”

They are also enjoying their trips ashore; “We’ve been doing massive amounts of walking every day. In Coffs we went to the Big Banana, where we tobogganed and watched candy and choc-coated frozen bananas being made.” At the end of April on the Gold Coast they spent “jam-packed days” at Dreamworld and Sea World. “Holly and Paddy loved the rollercoasters and Summer snorkelled with rays, gropers and tropical fish, and did underwater somersaults only inches away from sharks – she even managed to pat one!”

All along the way, Summer, Holly and Paddy continue to experience all the usual childhood joys and milestones: Paddy lost his first tooth at Camden Haven and they have all celebrated their birthdays on the boat.

Although they arrived in Mooloolaba on May 2 in lovely weather after a gentle 120 nautical mile from the Gold Coast , (“which should have been 80 nautical miles but Mat was chasing the wind”) unco-operative weather and seas meant they had to stay put for a while.

“Not a bad place to be stuck!”

They had a little hiccup when they arrived. Their anchor didn’t grab properly and a 30 knot wind pushed them onto a sand bank on an outgoing tide. “The Lunacy – the leaning yacht in Mooloolaba! Although it was quite stressful at the time we and the yacht got through it unscathed.”

Thanks to the help of several local yachties and a rising tide, Lunacy was released “from the clutches of the river. We couldn’t get to the marine quick enough where we stayed safe and sound.” They caught up with old friends and went surfing in Noosa and Summer had her birthday and celebrated with party food and a birthday chocolate soufflé!

“We have discovered the joys of catching swimmer crabs and huge mud crabs. They are so delicious! Just as much enjoyment eating them as it is getting them out of the nets. Lots of squealing and jumping around, mainly from Mat, as I’m official torch holder.”

Next stop, was Fraser Island, crossing Wide Bay Bar before arriving at Gary’s Anchorage. The mosquitos and sand flies gave them incentive to move on to North White Cliffs and Kingfisher Resort. 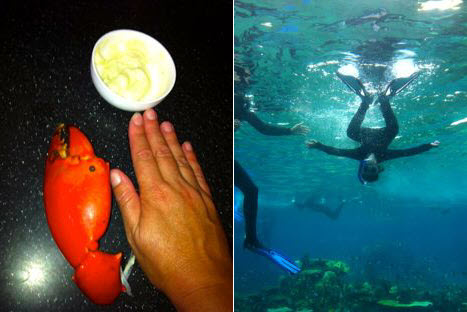 “It was great as we could use the resort’s pool and shower and the kids had lots of fun in the junior rangers program.” We sailed to Moon Point and anchored off a soft white sandy beach. Mat then did an overnight sail to Lady Musgrave Island.”

“This was an absolute highlight of our trip so far…

… it was an amazing coral island with luminous turquoise water teaming with wildlife and turtles, and stunning sunsets. We spend 3 amazing nights there.”

“We had a great sail, averaging 8.5 knots. We were humming along.” Next stop May 25 was Great Keppel Island. “Mat caught a honeycomb rock cod – it looked like it belonged in a tropical fish tank so we put it back in the ocean.”

“Great Keppel is a beautiful place and we had 4 great nights here, but we experienced 25 knot winds and a rolling swell so we decided to sail to Port Clinton on the mainland. We averaged 8 knots and surfed the waves getting up to 12 knots, with torrential rain coming at us sideways!”

Not surprising, they were seasick but upon arrival at Port Clinton the only mishap was the loss of the end piece of the self tacker track.

“We sheltered here for a couple of days while we waited for the torrential rain to pass. We couldn’t leave the yacht as we were in an army training area, plus there were crocs in the river so no swimming! Needless to say, no happy snaps of PC!”

As all good cruisers Mat and Ally were careful of water use. While sheltering from the rain they watched the streams of fresh water racing down the gunnels, off the stern and into the salt – what a waste

A couple of cut off milk bottles, a dash of ingenuity and a length of hose later, they were rejoicing in watching this water from the heavens being redirected into their water tanks! No need to skimp on hot showers now!

After two weeks of no reception on any of their phones, computers, TV and marine tracker they have still managed to do quite a bit of island hoping.

Making friends with a keen fishermen family who own the catamaran ‘Forever Young’ they have enjoyed numerous delicious fish, rice and salad dinners.

‘Forever Young’ have onboard entertainment in the form of their Cat that had 5 Kittens, and they have been able to cuddle them and watch them grow since they were 10 days old, “they are sooooooo cute,….and no we are not keeping any!!!”, said Ally.

They also have a 4 year old daughter Shakeria and the kids have loved playing with her and vice-versa. “We have been snorkeling once, but it was no good, too cold, water cloudy and water too shallow, strong current and windy. Here for a few days to re-stock, do washing etc, then off to all the islands again”.

Myself and the kids had to wave good bye to Ally for 5 days as she flew back to Iceland (Melb) due to the passing of Nana Pat. Daddy and his 3 crew haven’t stopped since Mummy left.

Went to Whitehaven beach for one night then to the lookout the next day to get a better view of Whitehaven Cove and Hill Inlet, one of the most amazing/beautiful places on earth. Sailed back to Airlie saw what we think was a Dugong, and now back in beautiful Palm Bay lagoon.

Yacht is parked only 12 meters from sand at low tide. Here for a few nights, then back to Hamilton Island to get Ally on Tuesday. Thankfully the Lunies, as they call themselves are all back togeher with Ally cooking her beautiful prawn coconut curry for dinner. Visit this page for the next stage of their trip.

If you’re ready to live the dream like the Shepherds,contact your local Windcraft office 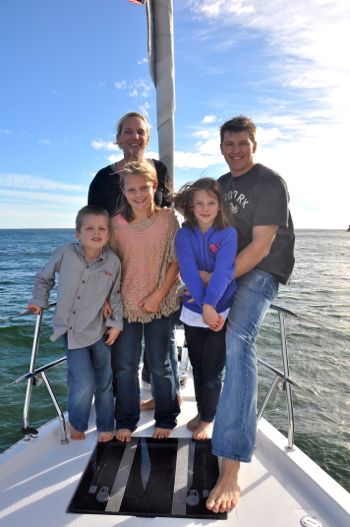