A Geelong Race Week win is just one of the highlights of this past year for Megan Jackson and her family. Pretty impressive when you discover it was on a boat they initially bought as a family holiday home!

Megan, husband Mark and their two daughters, Amelia and Grace have owned their Hanse 385, “Cocoon” for twelve months. And the Geelong win is not the only achievement this year, as they also won the Royal Yacht club of Victoria’s “Steak And Mushrooms” series – making them the ones to watch during the Melbourne rally season!

We caught up with Cocoon’s main skipper, Megan. 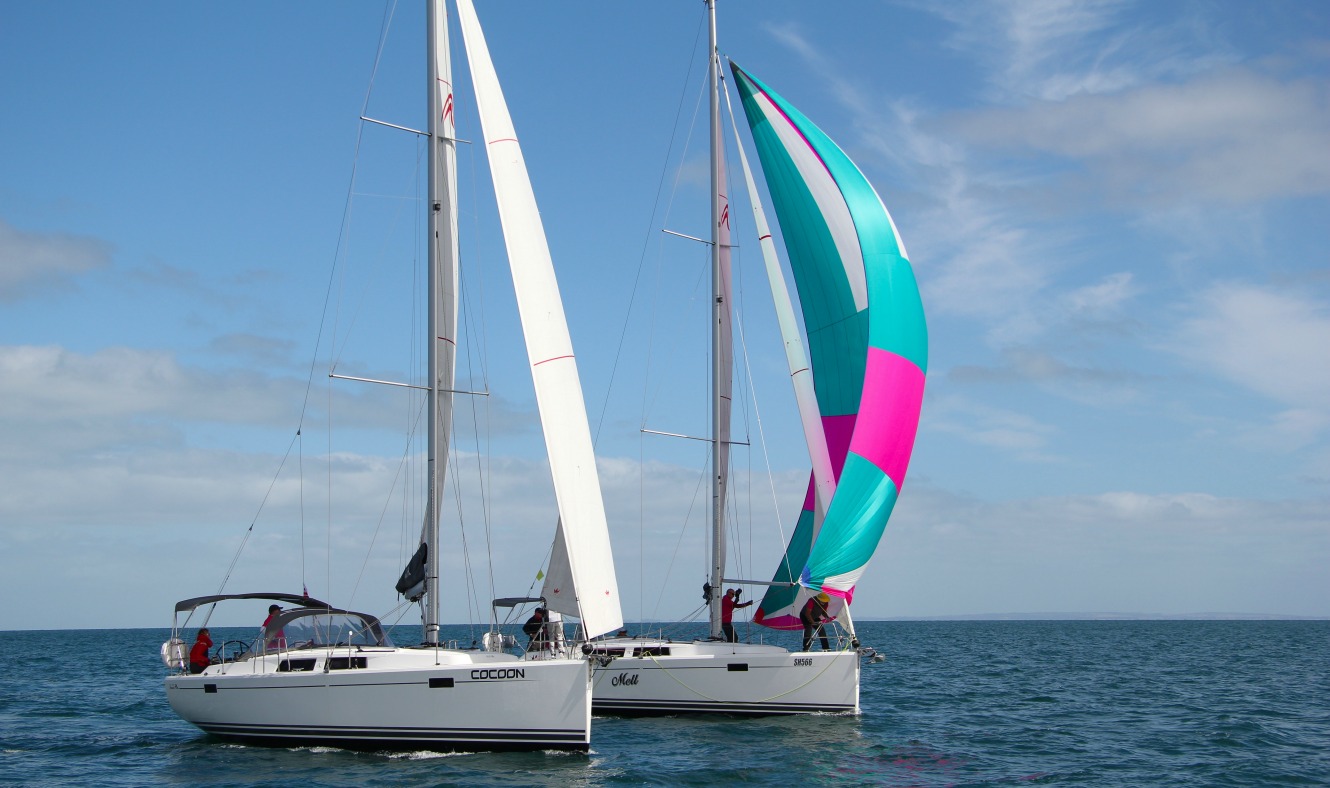 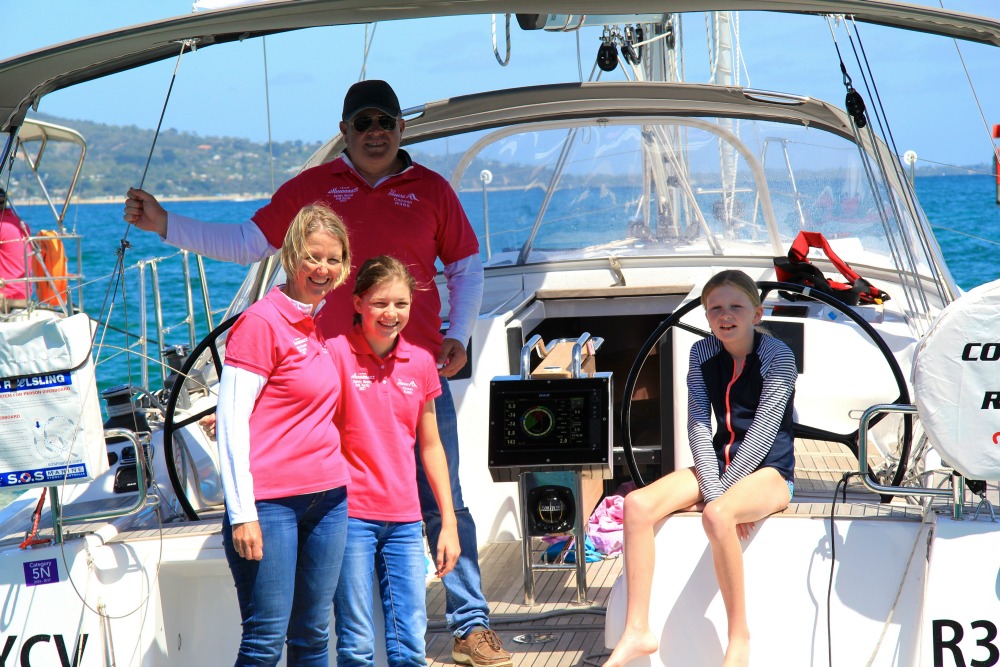 What made you decide on the Hanse 385?

What first drew me to the Hanses was their solidity, the lightness of the interior and the simplicity of the layout.  It just felt like it was well made. Other yachts we looked at had very dark interiors and had felt flimsy – I definitely didn’t want that!

I had selected the interior colour scheme before we’d even decided to buy the boat.

So that was where it all started at the Sydney Boat Show in 2015.

I’d come back into sailing and was crewing on another boat. My husband is a retired horse trainer and he hadn’t done a lot of competitive sailing, but had been a hobby windsurfer.

We just wanted to do something we could involve the whole family in. We looked at what was on offer in Melbourne and then went up to the Sydney Boat Show. To be honest, I didn’t really know the Hanse brand.

Tell Us About Your Previous Sailing Experience?

I started dinghy sailing when I was 6 and sailed regularly until heading off to university.

I did Saturday racing, State and National championships and excelled at none of them!

It’s been great to bring some of those old sailing friends back together in this new boat.

What’s Your Major Highlight So Far?

It would have to be the Geelong win. Having the whole family there, the party atmosphere and the unexpectedness of the result.

We had Nick Jones on board and his expert knowledge was invaluable.

All the Hanses were moored together down there and there was a healthy rivalry.

It’s like an extended family, we all celebrated together.

Tell Us About the Geelong Race Week 2017

It was huge to win at Geelong! As horse racing enthusiasts, we tell people it’s like winning in Melbourne Cup Week!

Geelong starts off with a passage race from Melbourne to Geelong. I believe it’s one of the biggest fleets on a starting line in the Southern Hemisphere. There are boats everywhere – you need eyes in the back of your head – it’s scary. Once in Geelong there is a series of races over four days and it was one of these we won.

That was a crazy race that started in no wind – we could have taken an hour to even get to the line. They abandoned the race and restarted it in a different part of the bay, which gave us a second chance to get the start right.

The wind remained fluky – I remember plodding along to a mark and looking across to see  ‘Timeout’, another Hanse 385 come flying to the mark on a strip of  wind that extended about a metre either side of only his boat. Eventually the wind kicked in, we had some lucky breaks and it worked out well.

We skippered the next race and took the kids camel riding on the beach and to the markets and amusements set up all along the Geelong foreshore.

We don’t feel compelled to compete in every race –  there has to be some fun element or the kids won’t enjoy it! 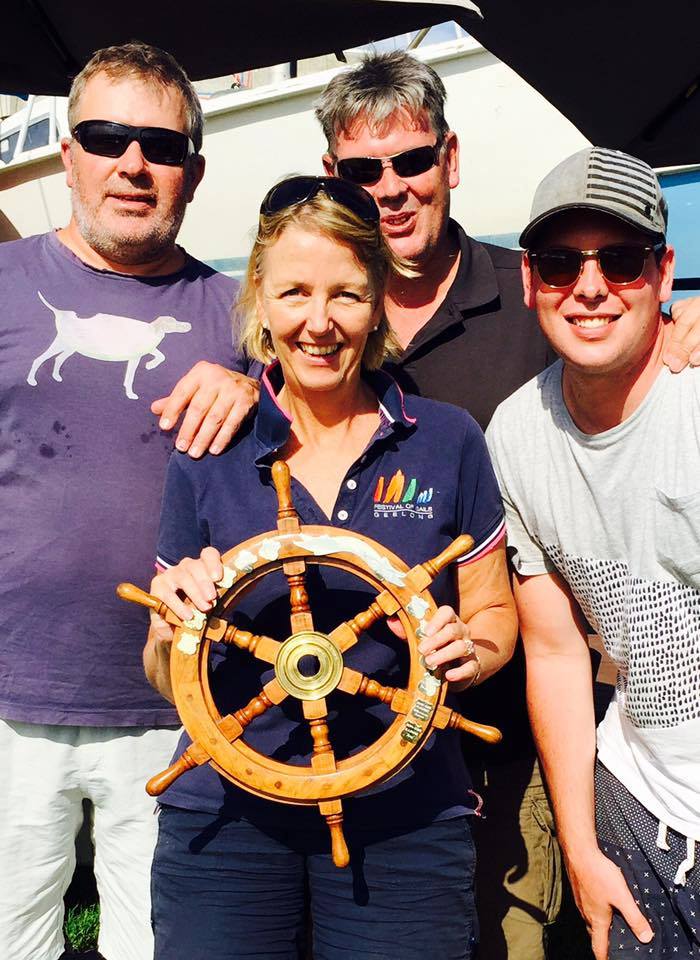 What is the Steak and Mushroom Race Series?

The Steak and Mushroom series is run on a Sunday at our home club – the Royal Yacht Club of Victoria.

There are two divisions, the Tripe and Onions for the smaller boats and the Steak and Mushrooms for the larger boats.

It’s a pursuit start which we thought would be easier for us on our reintroduction to racing.

We won the first three races! Thanks to a generous handicap.

In light winds we struggle but as the wind picks up – so does the Hanse.

We didn’t plan to do this much racing but we are really enjoying it.

I don’t know what happened! I haven’t been a member of a yacht club for 25 years. And you get back into that environment and get involved.

I’ve joined the social committee and we try to get to the club as often as we can. 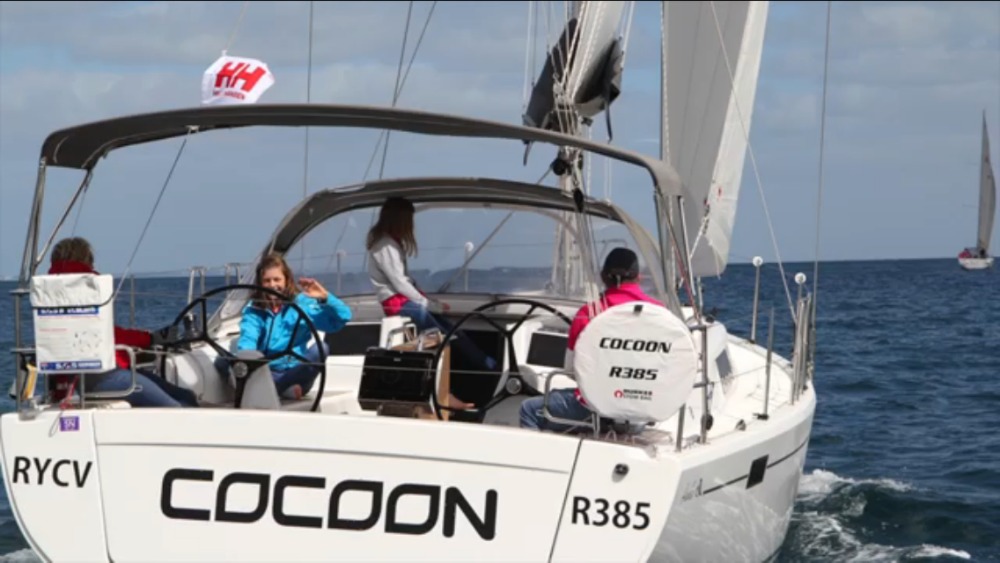 The club prioritise pens to boats that race.

I think you’re supposed to compete in six or so races over the season, but with all the regattas we’ve competed in, we’ve way outstripped that.

We adopted an attitude of getting in, having a go and pushing ourselves out of our comfort zone! 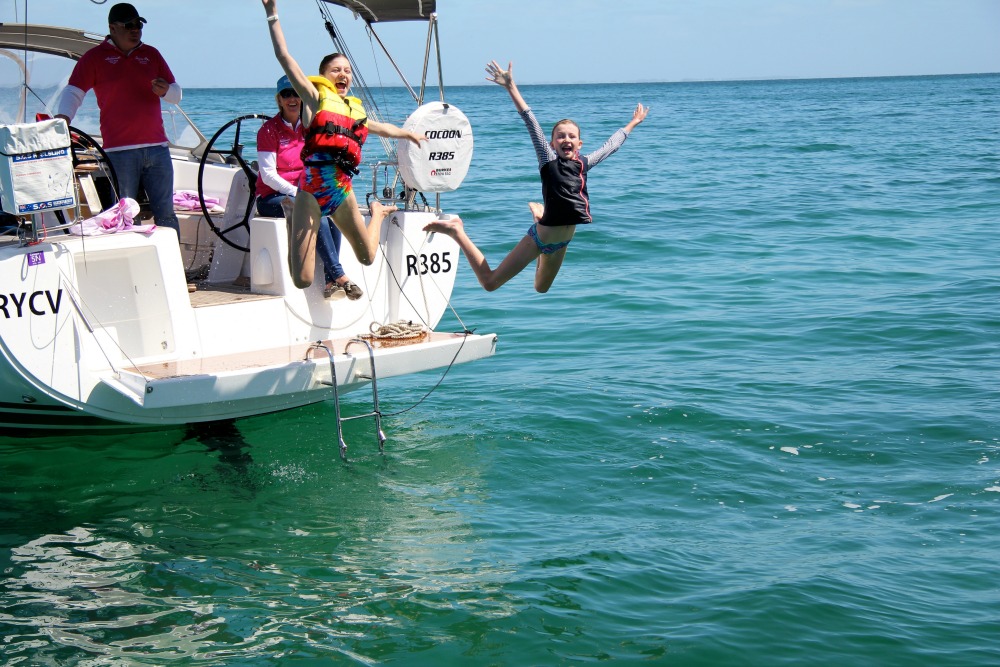 How Have Your Girls Been Involved?

The girls have sailed at all the regattas.

They love going to the Queenscliff cruising yacht club, the kids all come together from all the boats and have a great time.

Their highlight would definitely be being joined by a pod of dolphins and have them follow us for 15 minutes while the kids ran around the boat calling to them – the dolphins must have thought they were mad. 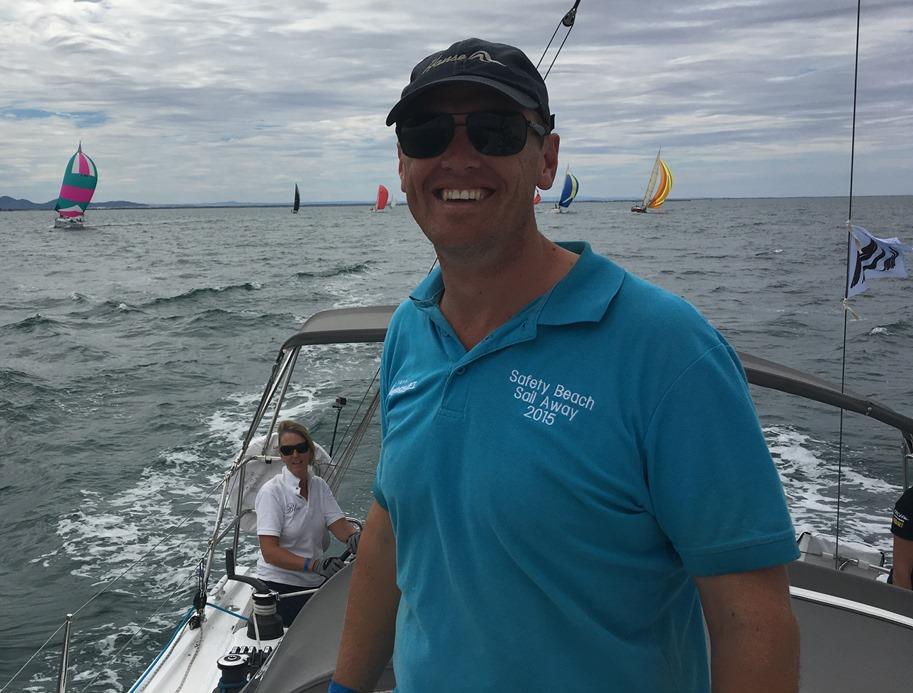 How Has Windcraft’s Nick Jones Helped You?

He’s just been amazing, right from the start, he’s been so supportive. He’s encouraged us to use the boat – he’s been an incredible mentor.

Nick is keen to share all his Hanse knowledge. Even Fiona his wife, and kids get involved in the rallies. We can’t speak highly enough of them.

It’s not a situation where we’ve been handed a yacht then see you later. It’s the gentle push out of the comfort zone and you find yourself down the track having done a whole range of things and feeling happy and confident. It’s a nice place to be! 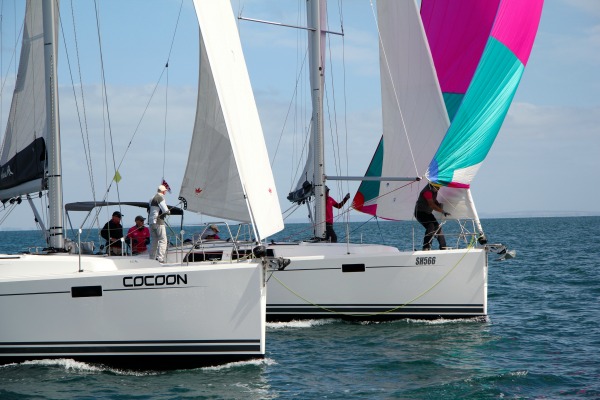 Have You Done Any Extra Training?

Parking was my biggest issue and still, at times, causes the most stress. We got Gordo, a Yachtmaster onboard.

We practised all types of parking and releases.

It was money well spent as my fear of parking has reduced. 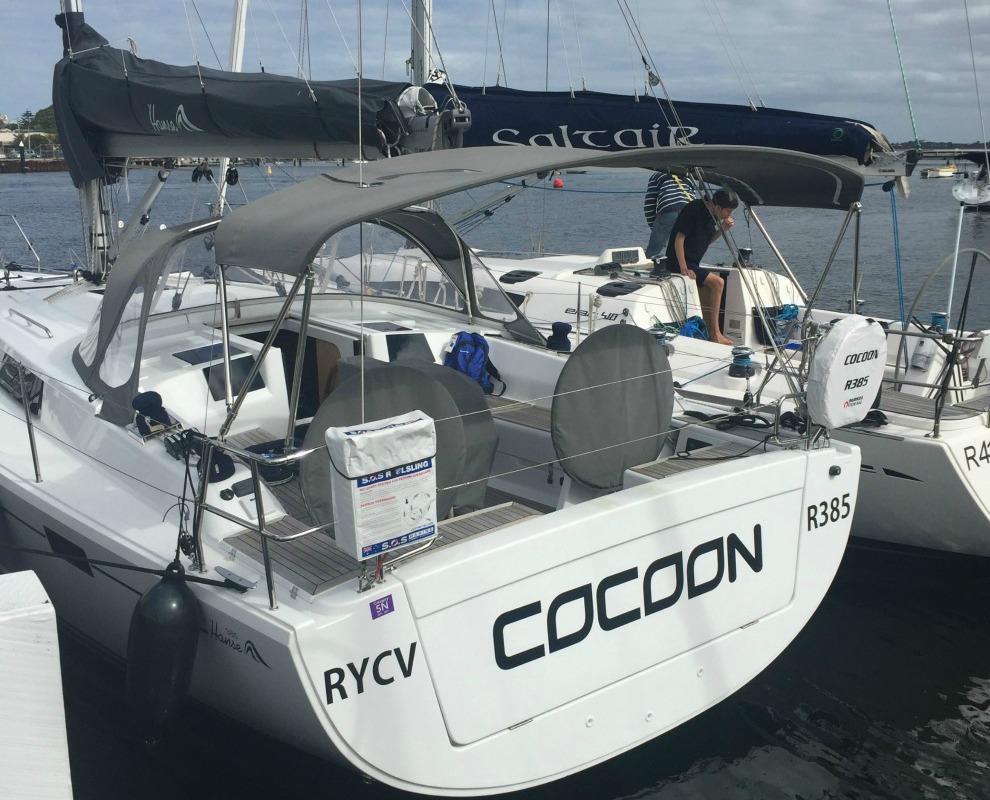 What’s Next For Cocoon?

I think we are just going to consolidate.

We’ll definitely do the Petersville and Geelong Regattas again.

Lots of trips to Queenscliff cruising yacht club and overnighters at  Docklands or Yarra’s Edge.

You can see a movie, grab something to eat, watch the footy or shop in the centre of Melbourne and cruise home after. 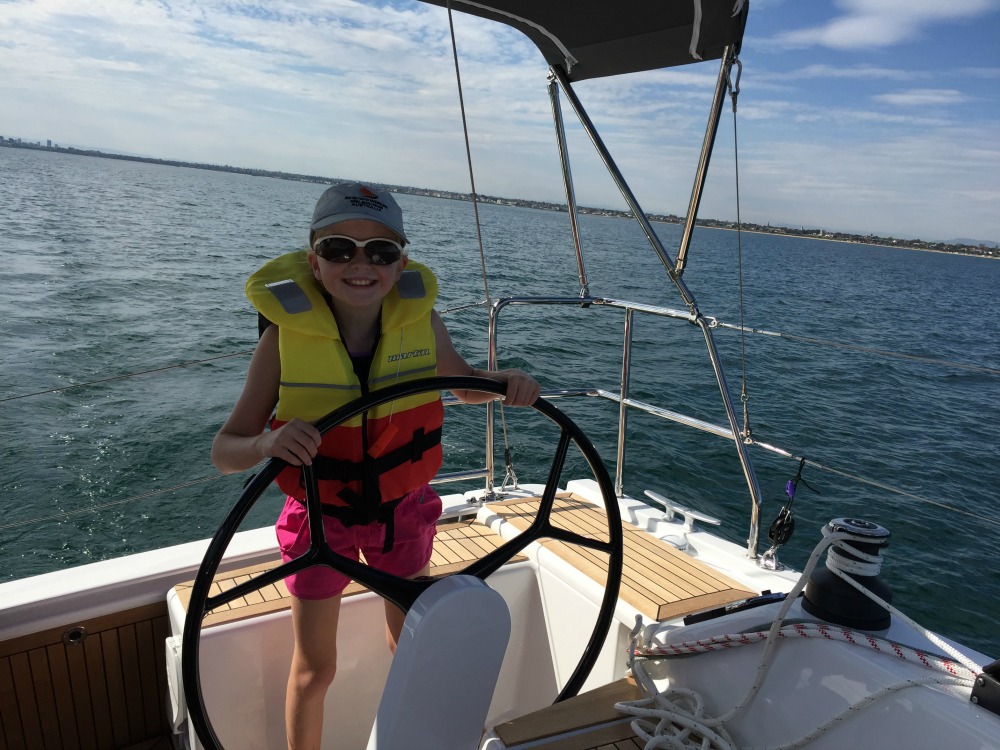 How Would You Sum Up the Year with Windcraft?

Every salesperson promises after sale service. But for us, Windcraft and in particular Nick Jones, have definitely delivered.

Nick was on board for our first races. He’s become a friend and a mentor.

I think Mark in the early stages was saying, “How many hours do we have access to you?” and Nick laughed and said, “Don’t worry about it mate, whatever!” And it really has been that situation.

The Team Windcraft Melbourne Owners’ rally confirmed that welcome, proving it stretches across the brand. It means next time, you wouldn’t go anywhere else.