First time Hanse owners Joan and Adrian MacQuarrie were a little apprehensive when they chose the notorious Bass Strait for their maiden voyage at sea but it wasn’t what they expected. 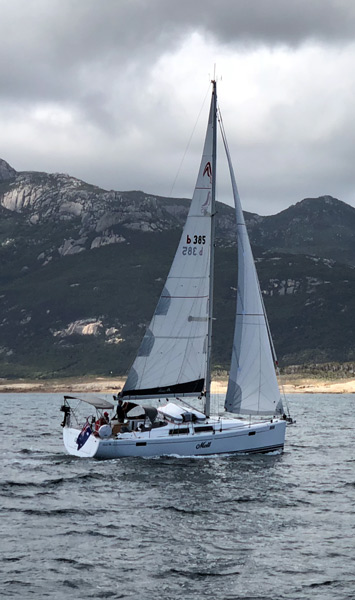 The legendary hazardous seas and strong winds were nowhere to be seen. Instead, they were greeted by calm waters and light breezes which made for a leisurely exploration of Bass Strait’s untouched islands and Tasmania’s north coast.

With their Hanse 385 ‘Mell’ moored at Blairgowrie Yacht Squadron on the beautiful Mornington Peninsula in Victoria, Bass Strait was an obvious choice for their offshore adventure – something Adrian has long had a thirst for. 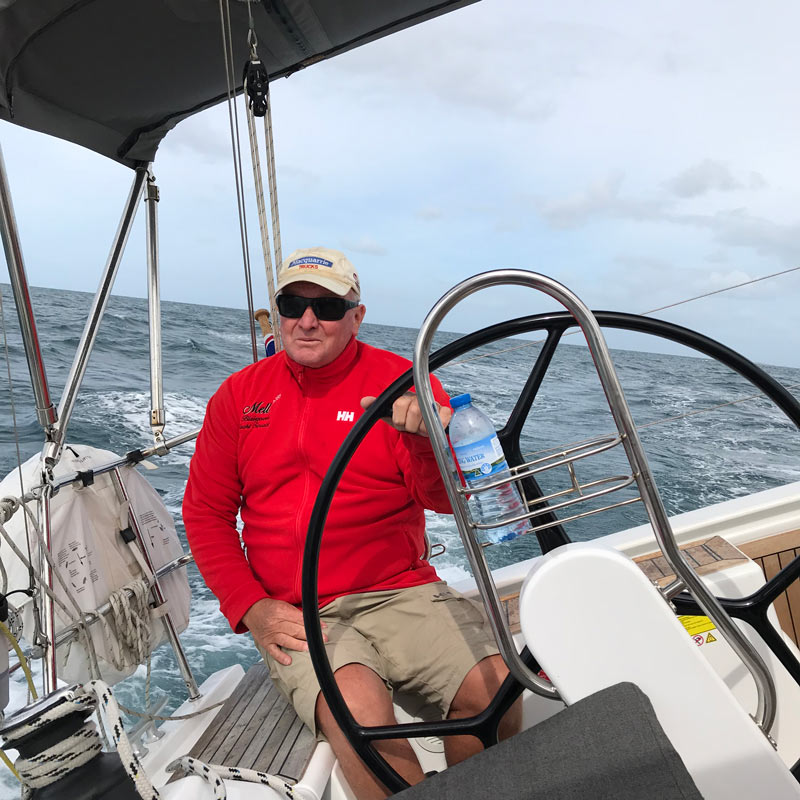 A novice in 2002, Adrian now has thousands of sea miles and sailing experience – Australia to Vanuatu, sections of the Atlantic Rally for Cruisers (ARC), Maine to Nova Scotia and Greenland through the Fiords to Iceland encountering icebergs and polar bears along the way.

Wife Joan has been sailing with her husband since purchasing their Hanse through Windcraft Melbourne in 2016.  She says, ‘I race with Adrian in Port Phillip Bay and sometimes I helm offshore so I’m getting more experienced as time goes by and I love it’.

The circumnavigation around Bass Strait was done with two other yachts so they could share the experience and enjoy camaraderie.  Adrian says, ‘we hadn’t taken Mell outside Port Phillip Bay so we created a cruising group of three yachts to go adventuring together ’. Three weeks and 600 nautical miles later there are stories to tell and tales to remember.

Adrian – the story of sailing our Hanse around Bass Strait:

Living so close to Bass Strait we well understood its reputation so we timed things to the best of our knowledge and ability.  I kept close and constant attention on the weather. It turned out that we were very lucky, in fact, we struggled for wind at times – it was just not what we expected.

After provisioning Mell and getting her ready for cruising we all made our way south after clearing Port Phillip Heads.  The first planned stop at Refuge Bay, Wilsons Promontory was aborted due to easterly winds which would have made for a very uncomfortable anchorage.

Instead, we sailed directly to the Kent group of six granite islands which are halfway between the coast of Victoria and Tasmania and so beautifully appointed they are considered to be like parts of the Mediterranean – and they really were.  Anchoring at Deal Island and nearby Dover and Erith Island for three days meant jumping on the tender and exploring for the first time – it was great fun. We walked and fished and can you believe those who had diving gear caught lobster! Bass Strait is apparently known for its lobster so we got to have it fresh and barbequed for dinner. 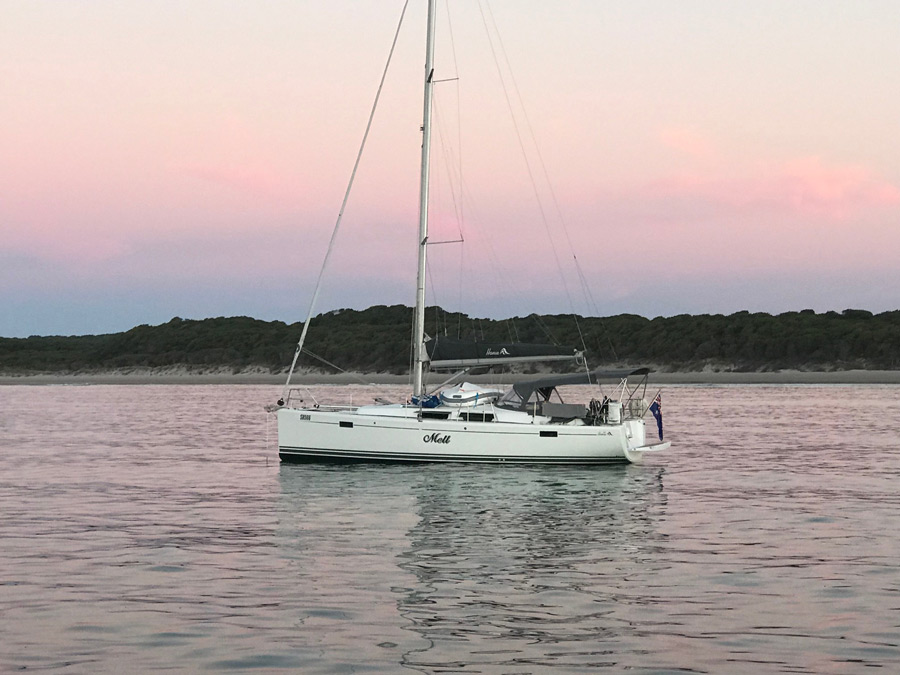 The next easy sail was to the coastal village of Killiecrankie, located on the north west coast of Flinders Island.  We had to make arrangements with the local fishermen to use one of the few available moorings. The bay was lovely but so shallow at times Mell was touching the sand so we only stayed one night.

Our cruising group wanted to explore more of Flinders Island so we sailed south to Trousers Bay on the south west coast.  The entire coastline was very remote and extremely picturesque.

All three yachts took different routes around the islands from Killiecrankie to Trousers Bay where we met up and had a bit of a race.  The self-tacking headsail meant our Hanse could tack through passages and islands much faster than the other boats!

After sailing south west in gorgeous weather we reached the mainland of Tasmania. We entered via the Tamar River to Beauty Point Yacht Club and stayed for a couple of days to explore by foot and by taxi and amoung other places, we visited Beaconsfield where the mine disaster occurred.

We all loved Tassie and were blown away by the friendly locals.  The Captain of Beauty Point Yacht Club even threw us his ute keys to collect fuel from the local servo because the fuel wharf was out of commission.  We felt so welcome – it’s a great yacht club and a great town.

Then came our stunning 22 km river cruise down the Tamar to Launceston where we berthed at the marina for a few nights.  It’s a lovely modern city so we all hit the restaurants and cafes, explored the natural environment and walked the famous Cataract Gorge. Interestingly there was a four meter tide and apparently, it’s normal to end up on the silt, even at the marina!  At one point there was only 1.7 meters of water and Mell draws 2 meters but she settled into the silt pretty well.

After two weeks our provisions were running low so we cruised north back up the Tamar to Beauty Point and bought what we needed for the next two legs of the journey. 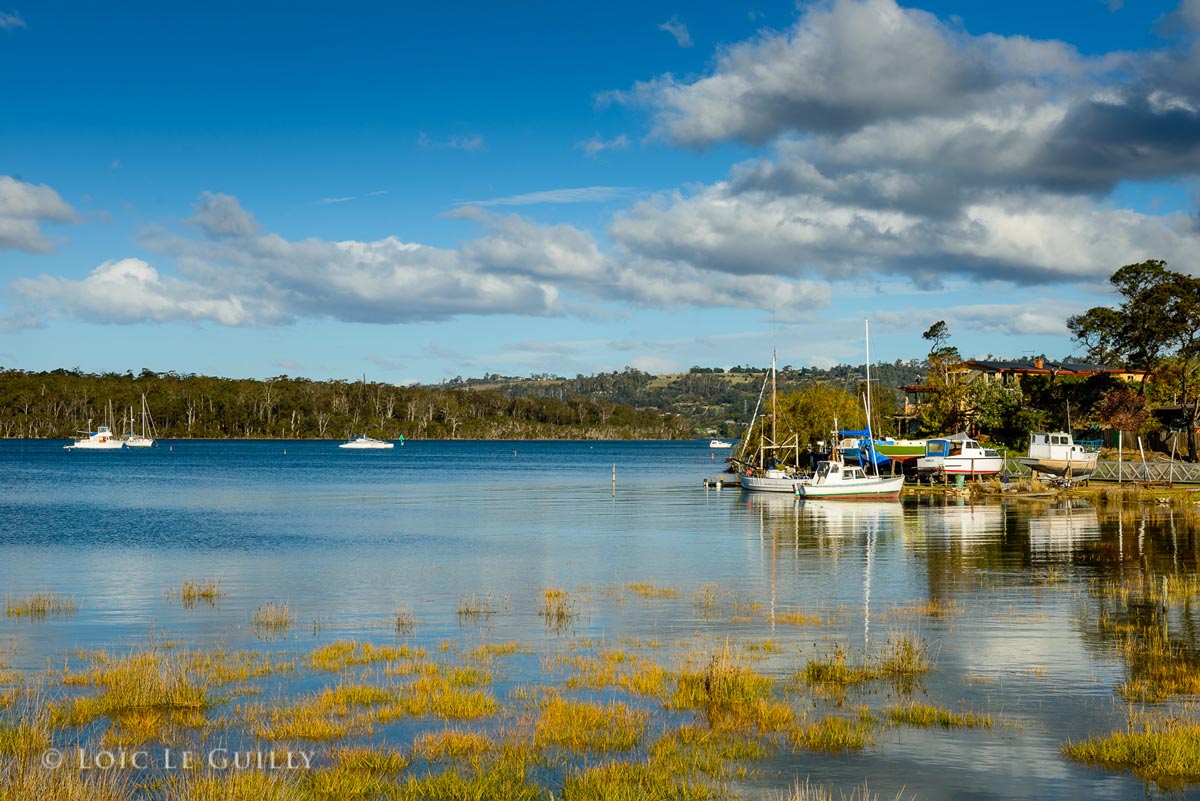 We then navigated east along the north coast of Tasmania to Stanley – purely a dock for fishing vessels.  It was safe but exposed and not really comfortable so we moved on pretty quickly out past The Nut, a famous volcanic rocky outcrop.

Our last stop and one of Joan’s favourites was Three Hummocks Island.  Yet again, the natural beauty was incredible – white beaches, crystal clear water and no one else around.  We just anchored, jumped in the tender and walked along the beach, it was very relaxing.

After three weeks we headed home, 130 nm across Bass Strait.  The 15 hour sail was brilliant with a 20 knot easterly and 1.5 meter seas.  We literally flew across the ocean with the self-tacker and full main.

Mell performed brilliantly offshore.  She is a very seaworthy boat, very well balanced in the water.  We used the auto helm constantly which made things so easy. The four of us on board were very comfortable – everyone had enough privacy and space for the entire trip.

Joan, what were the highlights for you?

‘I enjoyed the whole trip. The weather was great and I loved mooring off the relatively untouched islands and just exploring, the scenery was stunning everywhere we went.   Deal Island was amazing – so much wildlife.  We saw hundreds of dolphins in the water and kangaroos, geese, and birds on land.

The trip was good in so many ways and it gave me a feel for cruising with other boats which added a lot of fun for us all.  Mell was the party boat with me as the cook – the food bought everyone together. It’s just what I do and I loved that part of the trip.’

Adrian why did you choose the Hanse 385?

The most important thing for Joan and I was to buy a yacht from a company that provided excellent local support and backup beyond purchase. There are five other Hanses at Blairgowrie Yacht Squadron and we spoke to each owner. They had all bought their yacht from Nick Jones – Windcraft, Melbourne and they gave him a good wrap, he has a very good reputation.  All five owners recommended him, the company, the service and the consistent backup post-purchase.

We liked the Hanse 385 – it felt big for its size.  It was suitable to sail two up, for racing and for coastal and offshore sailing.  The racing area at Blairgowrie is quite shallow so a 2-meter maximum draft was essential.  The layout was excellent and the design used all available space.

The galley is particularly large because we have two cabins which made for more living space.  Joan appreciated the galley – she is a fantastic cook and liked the space. She was pleased to see it had an option for an inverter for microwave use.

Since circumnavigating Bass Strait, Joan and Adrian have spent the last four months on Mell sailing the east coast of Australia to the Whitsundays to complete in the Airlie Beach and Hamilton Island Race Weeks.

Then sailing back home to continue to race from Blairgowrie Yacht Squadron every weekend with their permanent crew.

They look forward to taking part in the annual Windcraft and Geelong Regattas. Joan says, ‘it’s a lot of fun and great to get to know the crews and skippers of other boats’.

This family have used their Hanse for adventure, fun and competition and have plans to continue. 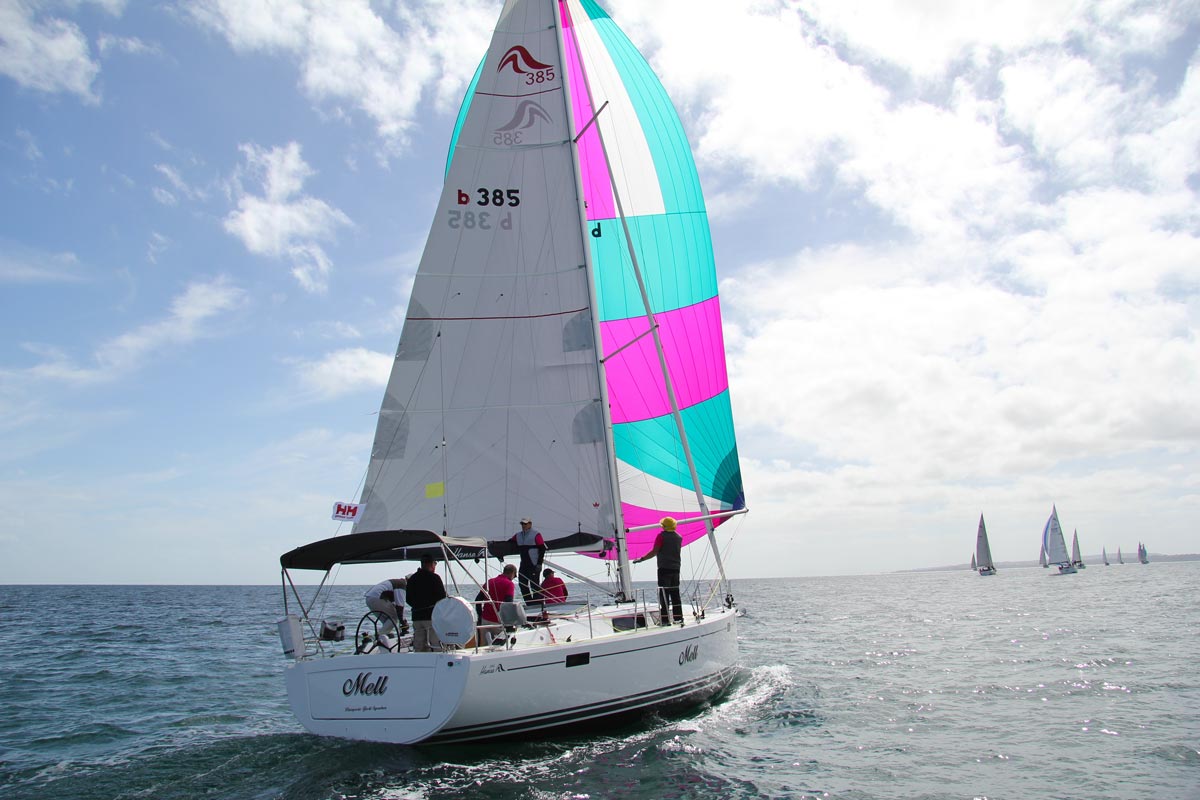