Buying a Yacht to Charter is All About Seizing the Moment 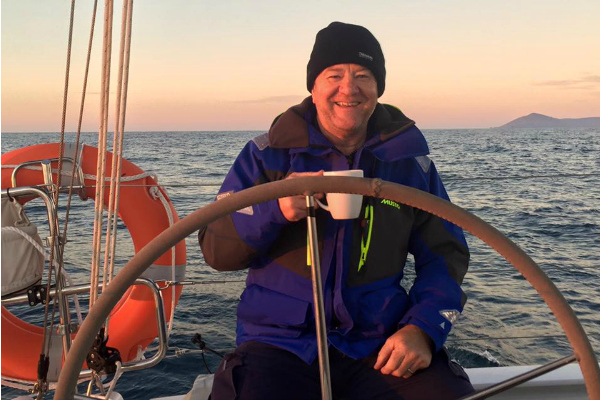 Winter in the Whitsundays, Summer in Sydney…sounds like a dream doesn’t it? But for Hanse 415 owner, Ross Smith he’s living that dream and sooner than he thought. He believes it’s all about seizing the moment…

We caught up with Ross to hear the full story…

I wasn’t really in the market for buying a yacht. It was just a dream.

It was the  week before the 2014 Sydney International Boat Show (SIBS) and we were at Darling Harbour having dinner with friends and watching the boats stream in to take their places dockside. I laid eyes on a yacht that I had never seen or heard of before, a Hanse 415. When I saw it coming into Darling Harbour, I just knew straight away that was the one! Even without seeing inside it. That’s what started me looking seriously.

In the following five months, I read, watched and studied everything I could to explore avenues to owning my own yacht. I looked at a bunch of other brands but that was always my favoured one. Then I read an article from Smart Boating about placing a boat in charter, particularly a 415.  I met up with Smart Boating and Mary from Windcraft and as soon as I met them I knew “2easy” was going to happen. The three of us then completed the spec.

The easy sailing was a big tick. I knew there were no sailors amongst my group of friends or family, including myself! And I knew that I had to be able to do it with just one other person or even on my own… so the Hanse 415 was the perfect choice.

What attracted you to the Charter option?

It was financial. I didn’t have the funds to purchase a half million dollar boat straightaway. Chartering gave me the avenue…whilst I’d already picked the boat, it was still 3 or 4 years away. Business was going well but not that well! Then stumbling across the ad by Smart Boating for putting a boat to charter, that was a new idea and it meant I could do it straight away. I also spoke to a couple of finance people and it just happened to coincide with recent changes in legislation. Everywhere I pointed led me to the fact that I could do it now if I do it this way. 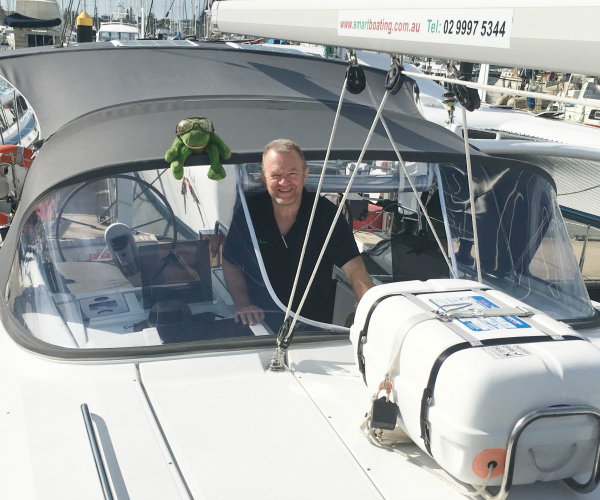 What about your sailing background?

I was raised in Port Hacking and I grew up around powerboats and weekends on the water. I spent nine years in the Royal Australian Navy as a naval shipwright. So I was used to big boats but I was an engineering sailor and knew nothing about navigation!

You know the trickiest knot I did was my shoelaces!

In buying a new yacht I threw myself into the deep end, with effectively NO sailing experience but I felt remarkably calm with the expert support around me.

I did a basic navigation course with Neil from Above and Beyond Boating. And I had hands on training from the Windcraft team.  Then I did Yachtmaster with Neil, which I did over three and a half months at Royal Sydney Yacht Squadron.

It was great. It gave me a lot of information that gave me the confidence to do the trip to Airlie Beach. I couldn’t have done that trip without that knowledge. 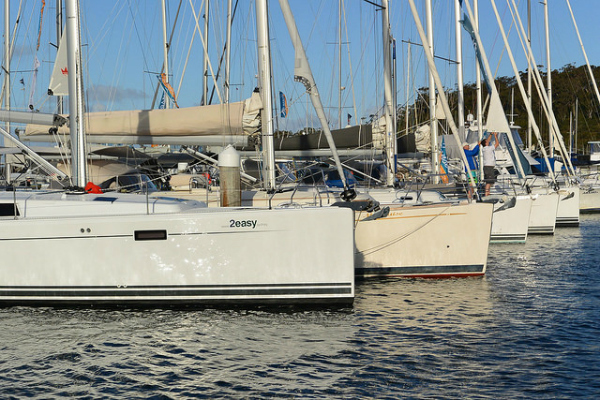 Tell us about your first trips on 2easy

Prior to Charter operations, 2easy exhibited at the 2015 SIBS and I sailed down to Sydney with Smart Boating intent on a full training session. Unfurling the sails for a starboard tack in Bayview we sailed around Barrenjoey, around North Head, through the harbour, all the way to Barangaroo on the same tack. So much for the experience,…2easy really was too easy!  The next big challenge was the Windcraft Port Stephens Sail-Away – a fabulous experience in the company of other owners. 2easy again exceeded our expectations in her ease of handling. 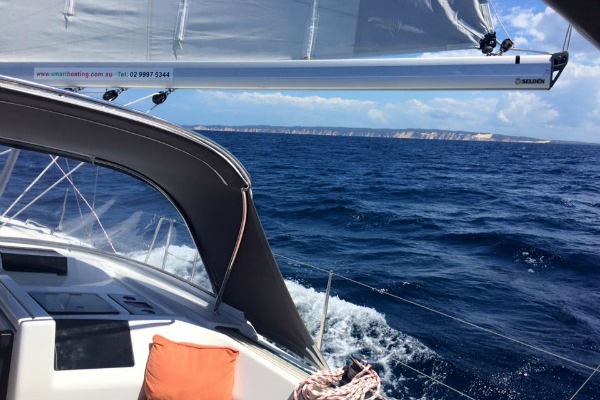 How did you come up with the idea of two charter locations?

Someone has to move 2easy between seasons, and that has fallen on my shoulders. Full of confidence from my recently completed Yachtmaster course, I set off with three good mates to sail from Pittwater to Airlie Beach.

Working against the tide, current, wind and lack of experience, myself and the intrepid crew set off on our big adventure. 10 days with stops at Mooloolaba, Mackay & Hamilton Island.Piers, myself and David Grice (new joint owner of Smart Boating) have just returned from Airlie with 2easy in very different conditions with just the one stop at Southport for a day and a bit to sit out a southerly and catch up with other new friends on Bilbungra (Hanse 455). All up, a seven-day trip in far more testing conditions.

“he had never gone so fast on a yacht and, had a hot shower at the end of his watch.”

David won the bottle of rum with a top speed of 15.4 knots boat speed! 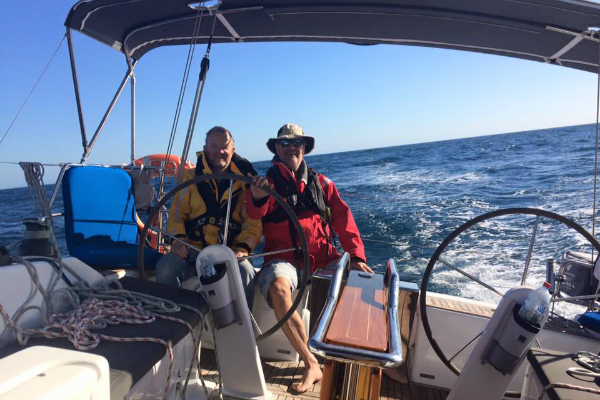 How have you found the split locations so far?

The yacht is being used a fair bit so it is copping some wear and tear but that’s to be expected. This was the ‘set up year”. It was set up for Smart Boating and then going to Airlie Beach, Queensland has a number of different requirements. And then the Whitsundays they have more requirements so there were a lot of boxes to tick and equipment that had to be put on the boat. So there’s a whole range of stuff that goes on the boat for the Whitsundays and goes off for Pittwater.

For example, the boat has three dinghies. It’s got one dinghy for Pittwater, one dinghy for the Whitsundays and then it’s got a dinghy that we use going North and South. So I’ve got four boats now!

My involvement is very little in the day-to-day running of the boat. Both Smart Boating and Cumberland do absolutely everything, 100% and then when I have to get involved, they make that process very easy.

How much time do you get to spend on your yacht?

I’m allowed to use it 28 days a year before the ATO consider that I’m using it for personal use. In saying that we don’t get anywhere near the 28 days. I have the ferry of the boat from Sydney to Airlie beach and return each year and that doesn’t count towards the 28 days because all I’m doing is ferrying the boat, I’m not getting any pleasure out of it! In the first year we probably only used it 20 days and most of that was handover activities. For the moment 28 is sufficient because you’ve got to remember it’s in Airlie Beach for 6 months.

The last two weeks we went up to pick it up and I spent 5 days on it at Airlie Beach preparing for our southern passage. My wife, Leanne isn’t a boating person but after 5 days in the Whitsundays on 2easy, she loved it!  Ooops…I’m not supposed to tell anyone that! 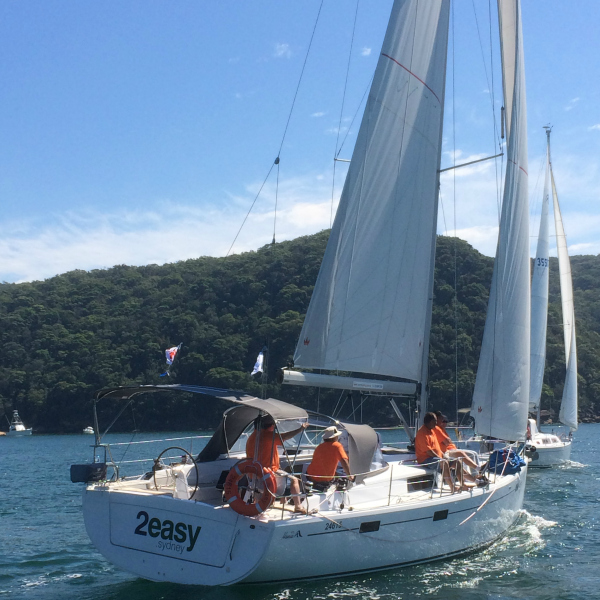 I’ve also really enjoyed the Windcraft Owners Rallies. This year 2easy was in the Whitsundays for the Port Stephens Sail-Away but it didn’t stop me…I just threw my hat in the ring as available crew and I went up with Greg on “Lady Janie” and came back with Andrew on “Penzance”. It just broadens my experience when I sail with other people!

How has your sailing ability changed over the last 15 months?

Chalk and cheese. I feel like I could jump on my boat and take it pretty much anywhere. I don’t know that I could say that for any yacht because the 415 is so easy to sail. So I’m accomplished at sailing the 415. There’s no comparison to 15 months ago. I am a naval shipwright so basic boat stuff not yacht stuff I can cope with quite comfortably and a lot of what I learnt 35 years ago is coming back to me. I’m hoping to do as many of the ferry trips as possible and my daughter and son are planning to join me in the future! 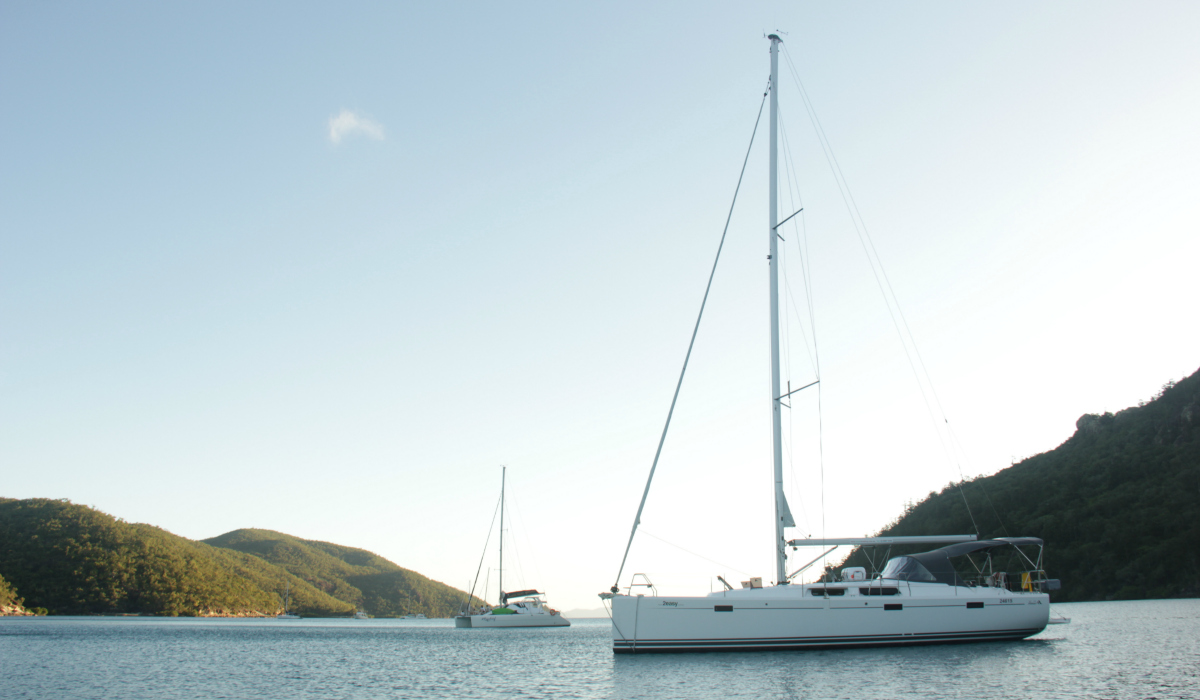 Want to live the dream too?

2easy is super popular in the Whitsundays and has chartered 110 days out of the possible 150 days. Sharon McNally, General Manager of Cumberland Charter Yachts says…

“The Hanse 415 is a fantastic addition to our monohull fleet, she was very well received by our clients. We look forward to greeting her back in the tropical waters of the Whitsundays in May 2017 for another sensational winter up here. Winter in the Whitsundays offers spectacular weather for sailing, plus Humpback Whales from June to September are an added bonus for guests. We welcome Windcraft friends to join us for a winter break in the Whitsundays. I also  welcome other owners considering dual port charter options to contact me if they have any questions.”

“2easy has been well received by Charterers in both locations with many re booking there next charter on the same boat. With separate head & shower in the main cabin she is very popular with combine couples sharing the cost of charter. This combined easy handling of self tacking head sail and in mast furling makes her a sought after charter vessel.  Smart Boating would welcome enquiry from owners considering a similar investment and lifestyle opportunity with a new Hanse commissioned for charter in sizes ranging from 34ft to 45ft.”

2easy charters from Smart Boating at Bayview November through to April (Call Sarah on 02 9997 5344) and Cumberland Charter Yachts at Airlie Beach May through October (call Sharon 07 49467500).