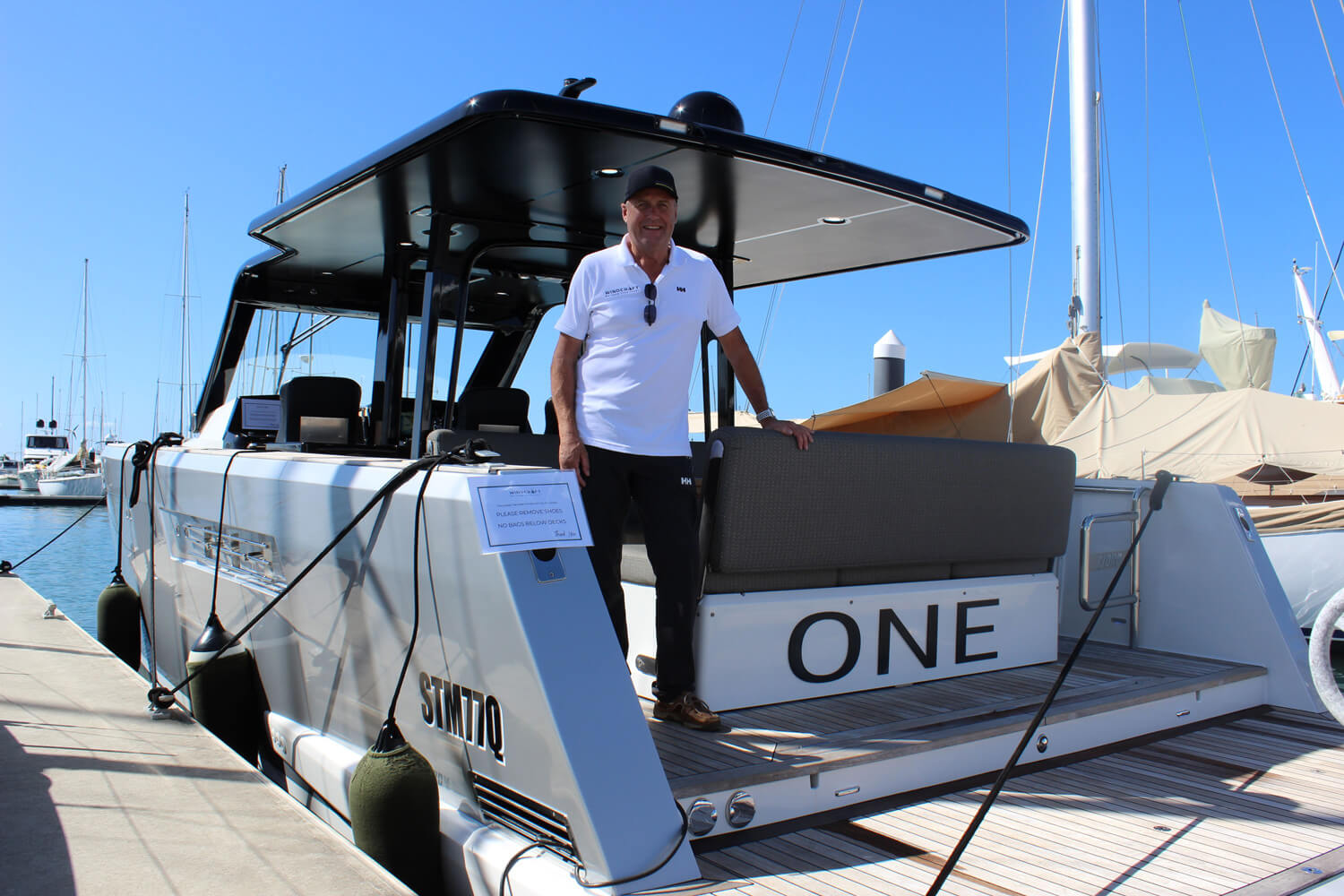 The inaugural Brisbane Yachting Expo has wrapped-up with Windcraft’s three models on display showcasing the best ways to enjoy the unique attractions of Queensland’s extensive waterways.

Off the back of a successful Sanctuary Cove International Boat Show in May, Windcraft attended the new event at the Royal Queensland Yacht Squadron’s on Friday 30 and Saturday 31 July.

Visitors had the opportunity to inspect the majestic Hanse 575, “Jo-De 7”, an acclaimed Hanse 315, along with the sleek Fjord 40, “ONE”, a head-turning brokerage boat.

Gavin Ward of Windcraft Queensland and his wife, Maryann were on hand to welcome boating enthusiasts on board. Clear skies, sunshine and looming restrictions brought a steady flow of show-goers over the two days.

“We had a lot of interest at SCIBS and sold a new Hanse 460 which is Hanse’s latest release, there are now two coming to RQYS, the first of which will arrive in time for SCIBS 2022,” said Gavin.

The RQYS show was organised as a showcase for South-East Queensland dealers to display their pick of their range to a market that has embraced boating in all its forms over 2020-21.

“People realise they can’t travel overseas or interstate with certainty, so they’re taking the step into buying a boat which is a great family activity,” said Gavin.

“The Hanse brand has something for everyone,” he continued. “Across the range, the philosophy of ease of use is fundamental to every model.

“The Hanse 315 is so easy to sail with great performance. The 575 has everything on board that opens and shuts and will keep you comfortable for a weekend sail or a month or two of extended cruising, including a tender garage, a self-tacking headsail, a practical helm with everything at your fingertips, electric winches, remote control anchor, Volvo Penta D3 110hp shaft-drive diesel engine, bow and stern thrusters, generator and water maker.”

As Jo-De 7 owners John and Debra Caulfield explained “We saw the 575 at Sydney Boat Show eight years ago and it was very daunting at the time – it seemed so large”.

“Then I went on board and I was converted,” said Debra. “It has incredible space inside – a master cabin and two double cabins, two ensuites, as well as a skipper’s cabin in the bow which we use as storage space. For that reason, in Europe it’s considered a great charter boat.”
On deck, the massive cockpit comprises two helms, two lounges and a large foredeck for sun pads. Clears and a bimini convert the cockpit to an enclosed social space.

“We’ve been as far as Sydney in the south and north to Dunk Island,” said Debra. “We love cruising the outer reef, Magnetic Island, Orpheus Island which has some amazing dive sites, and Hinchinbrook.”

The ultimate performance cruiser, Jo-De 7 has had considerable success in the various races and regattas it’s entered over the years, including second over the line in the Bribie Cup and a first place in the 2021 Moreton Bay Boat Club Single-Handed Race.
“Even loaded up with our tender and most of our gear onboard, we’re as competitive as the Farr 40 and other racing boats,” said John. “Its two sister ships were the fastest cruising yachts in the Transatlantic.” 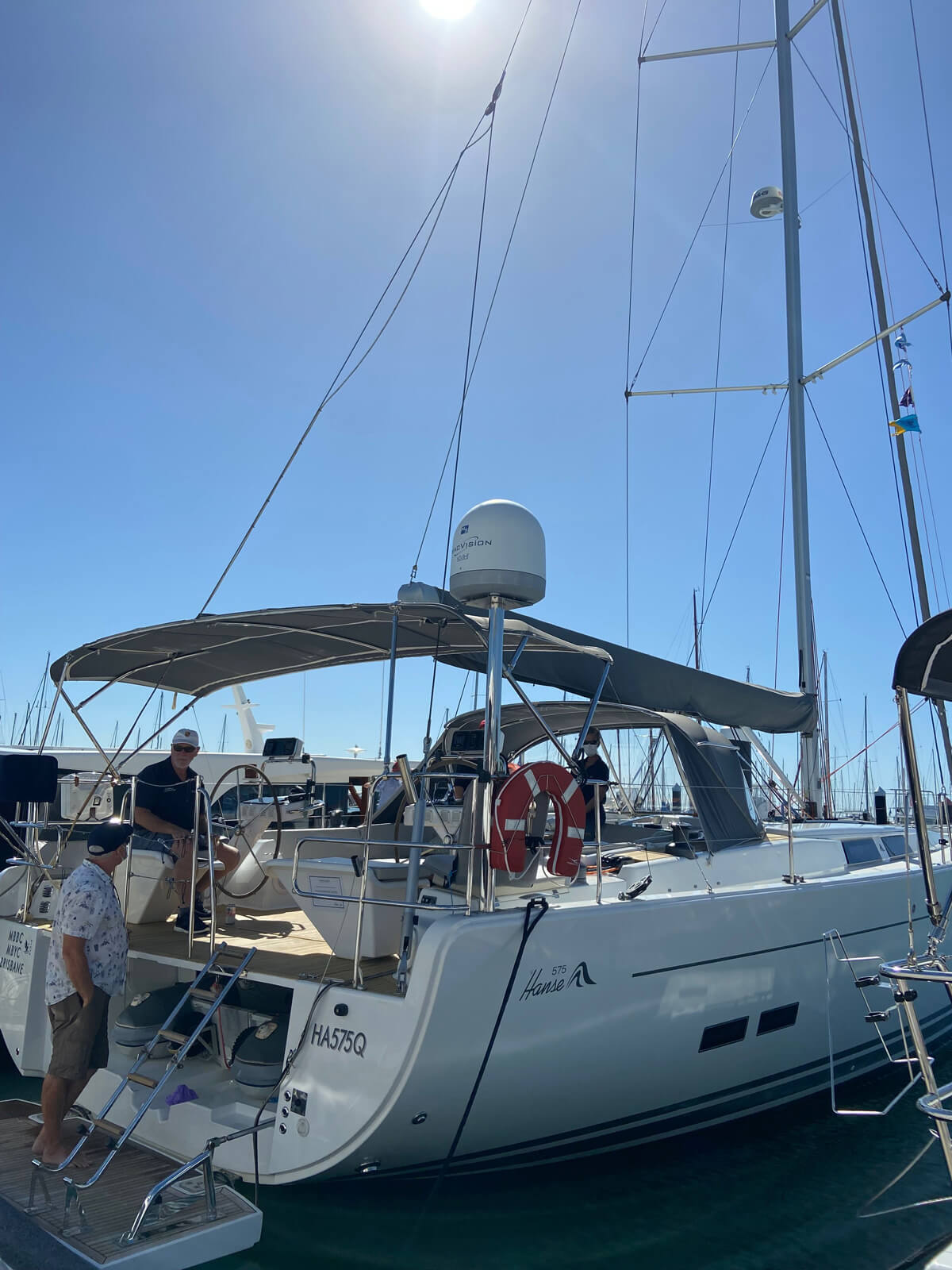 Windcraft proudly represents top sailing brands, including Hanse, Dehler, Moody, Solaris, Privilège catamarans, and in power Fjord and Sealine.
The Fjord 40, “ONE” on display at the Show is the ideal superyacht tender or fast passage dayboat, with the option to stay overnight.
“With a beam of 4-metres (13-feet), it’s a great entertainer,” explained Gavin. “The dinette converts to sun pads, there are three helm chairs, several fridges onboard, barbecue and an extended T top for protection.

“The owner has customised this vessel with foredeck and aft deck covers, among many other options. Below decks, there’s a V-berth master and a lounge that converts to a double bed, with a separate bathroom. You could easily spend the weekend on board.

“The beauty of this boat is you can shoot out for the day, zip from anchorage to anchorage, then home. Powered by twin 370hp Volvo Penta IPS 500, it’s a true 40 knot boat.”

Go to teamwindcraft.com for more, including the full ranges available from each of our highly respected brands.
If you want to contact Gavin Ward directly about a boat you are interested in, either call 0418 402 809 or email gavin.ward@windcraftyachts.com.