OUTDOOR ADVENTURERS TAKE TO THE OCEAN ON A HANSE

Jeremy and Anne Thatcher’s 415 ‘Athair’, has become a central part of their active and adventurous lifestyle. After meeting in Las Vegas while mountain biking, US born Anne moved to Jeremy’s homeland of New Zealand, the perfect country to pursue a shared love of the outdoors and their first offshore sailing challenge – the circumnavigation of the North Island. 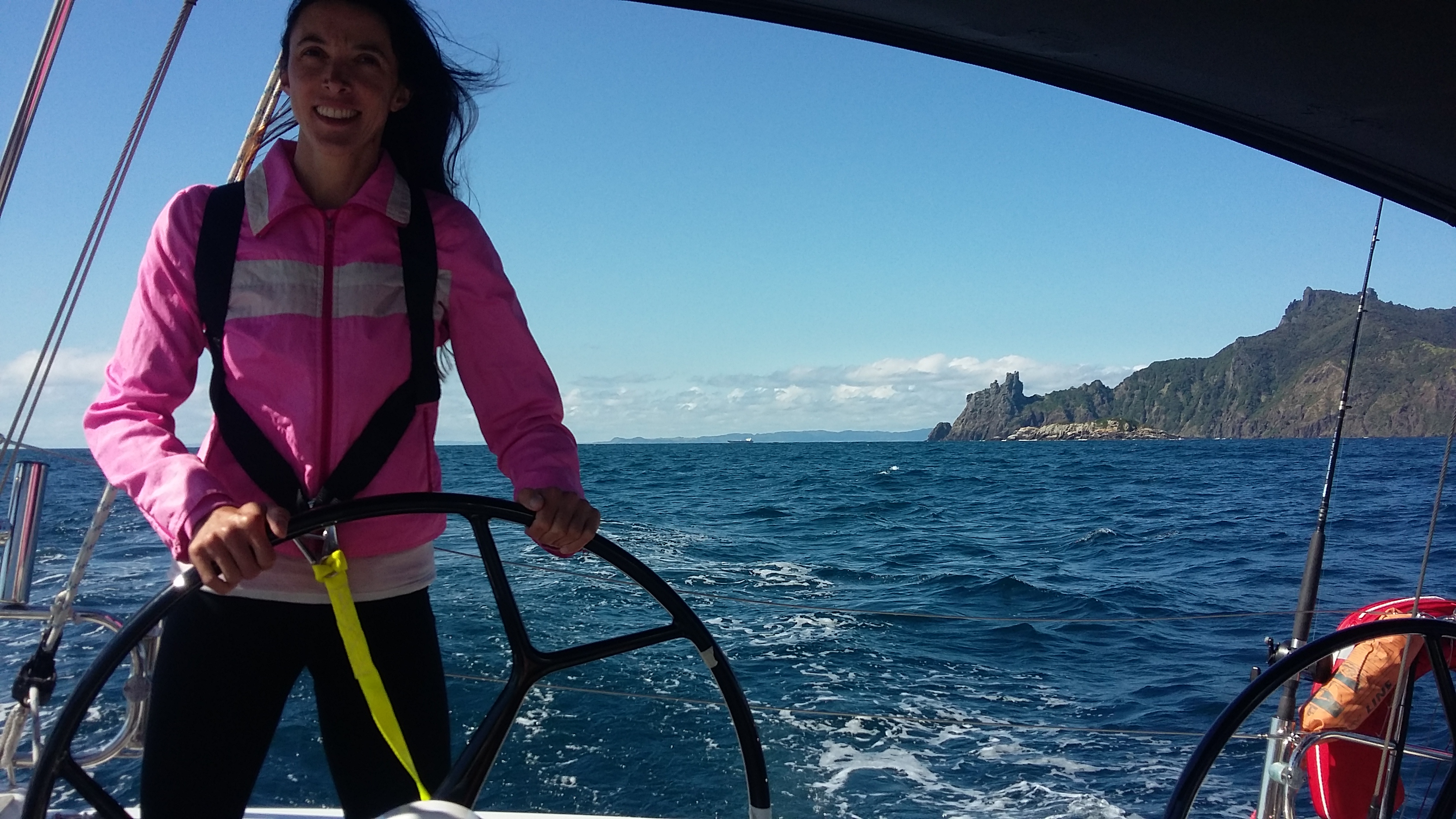 Jeremy grew up in NZ racing dinghies and messing around on boats while Anne was a city girl from New York. Sailing wasn’t on her agenda until they purchased their first Hanse 350 four years ago followed by their current Hanse 415. 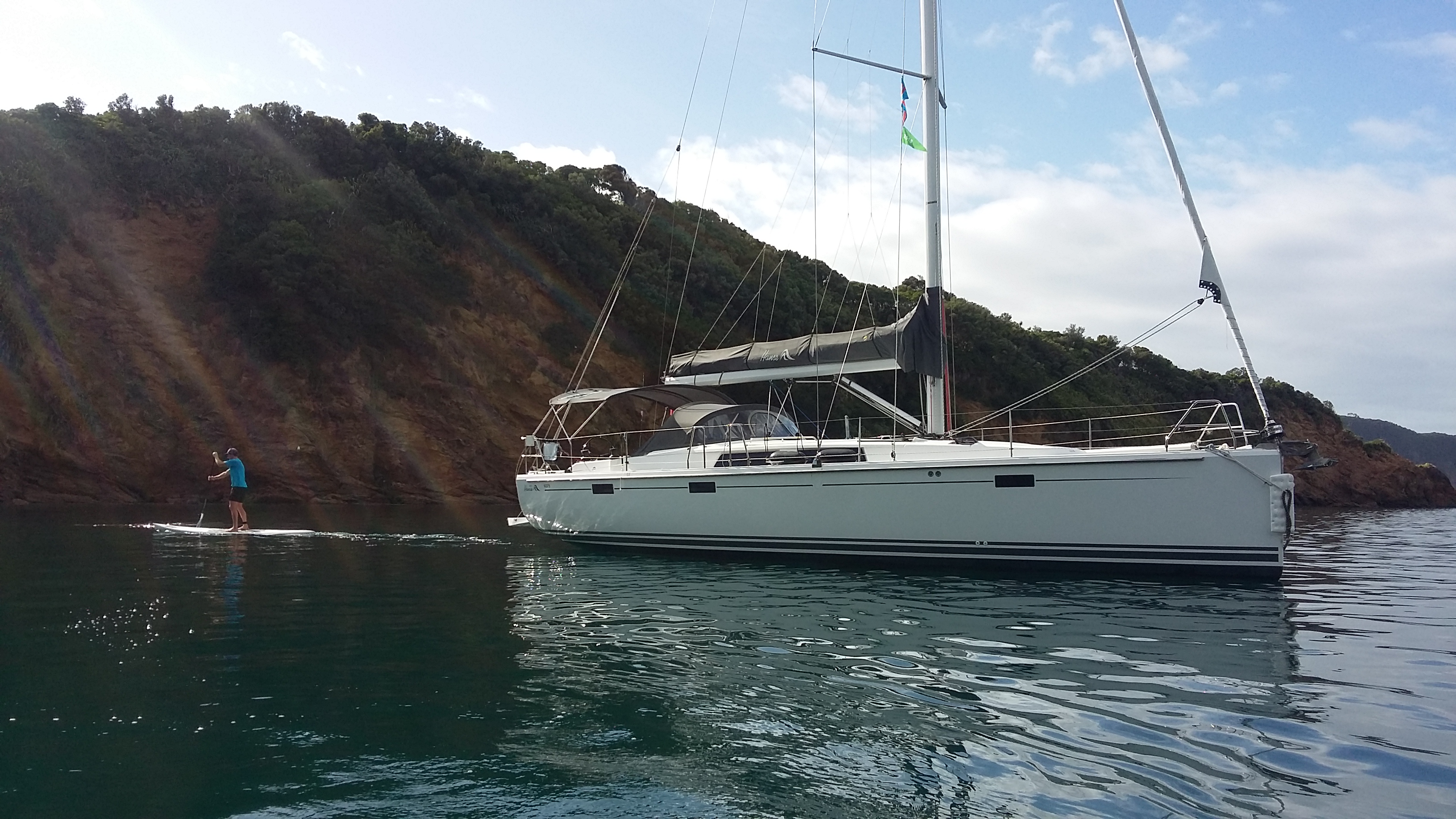 Anne says ‘I’m very enthusiastic about sailing. Our two Hanses have been great to learn on because they are so uncomplicated and easy to sail. I can now say I’m a moderately proficient sailor’.

Jeremy says ‘Anne has picked up sailing really well and our circumnavigation of the North Island has given her a lot more experience’.

Setting sail for two months became an adventure with unexpected experiences in the midst of natural and raw beauty.

Jeremy, can you tell me about the circumnavigation?

‘Navigating the four corners of New Zealand can be very treacherous so you want to choose good conditions or at the very least, the best you can. The weather can be really unpredictable – we heard many scary stories about 90 knot winds. The forecast can change quickly and on some legs there is simply nowhere to pull in for shelter so you have to be prepared and self-sufficient. I used two different chart programmes and cross referenced them at night. 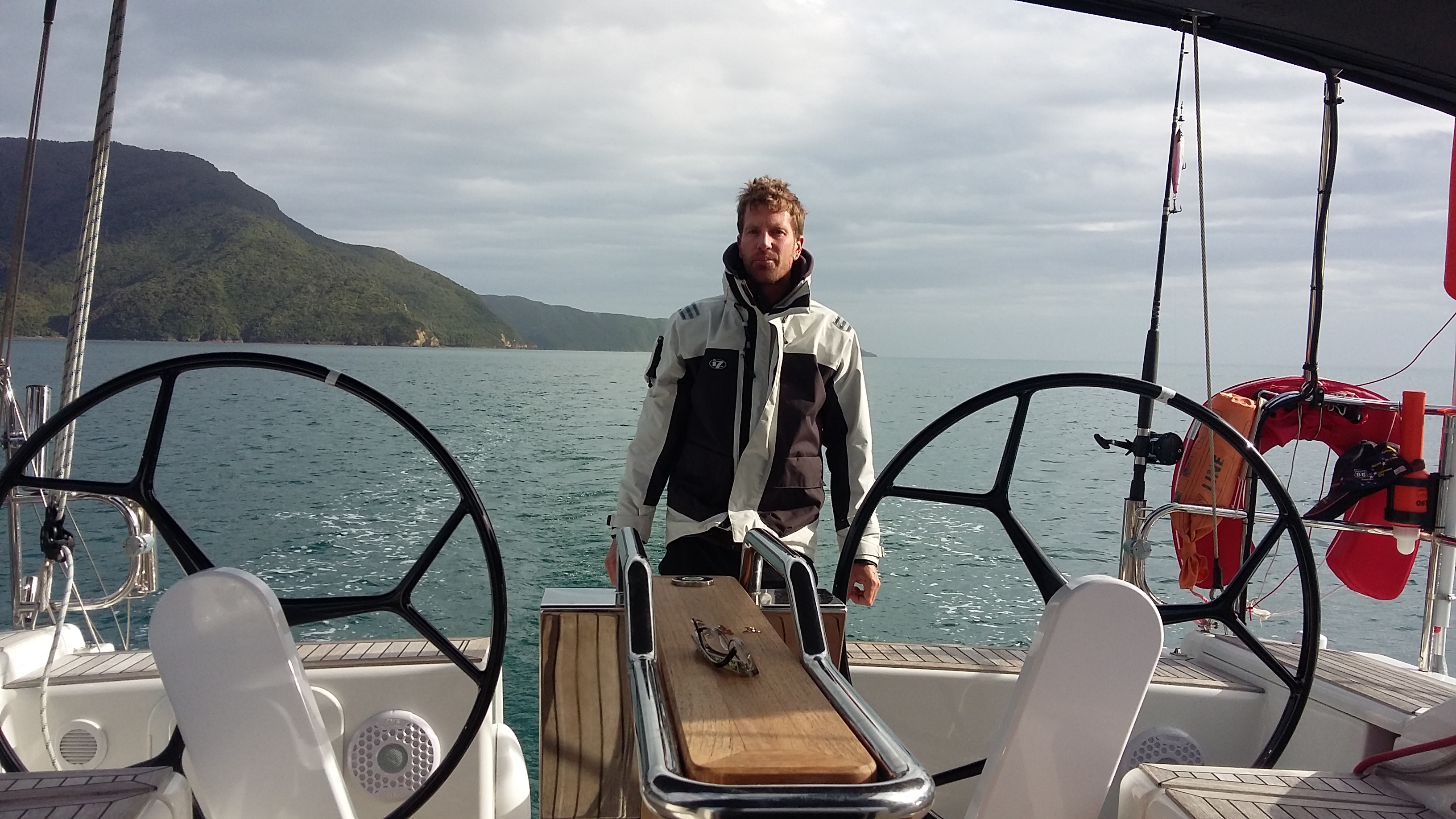 After months of planning, we headed North out of Gulf Harbour in Auckland and commenced our circumnavigation. Our first stop-over at The Bay of Islands was perfect – sunny and calm with white sandy beaches. But it was the calm before the storm.

The West coast is notorious for bad weather so as we rounded Cape Reinga, the Northern most tip of the island to sail South along the West coast, the wind was against the tide and the seas were so erratic and lumpy it felt like we were sailing over the top of houses. However, things flattened out as we entered the Tasman Sea.

We sailed the West coast for three nights and four days and the wind picked up to 27 knots off Mount Taranaki as we entered the Cook Strait. ‘Athair’ went really well sailing on a double reefed main with no headsail but we ended up in a huge washing machine for the night and just lay on the cockpit floor.

Our first landfall in four days was Able Tasman National Park on the North West Coast of the South Island. We loved it so much we spent two weeks anchored in different bays. Everything was within a row of our dingy. We used our mountain bikes, walked, swam in waterfalls and beaches, dived and fished for food. 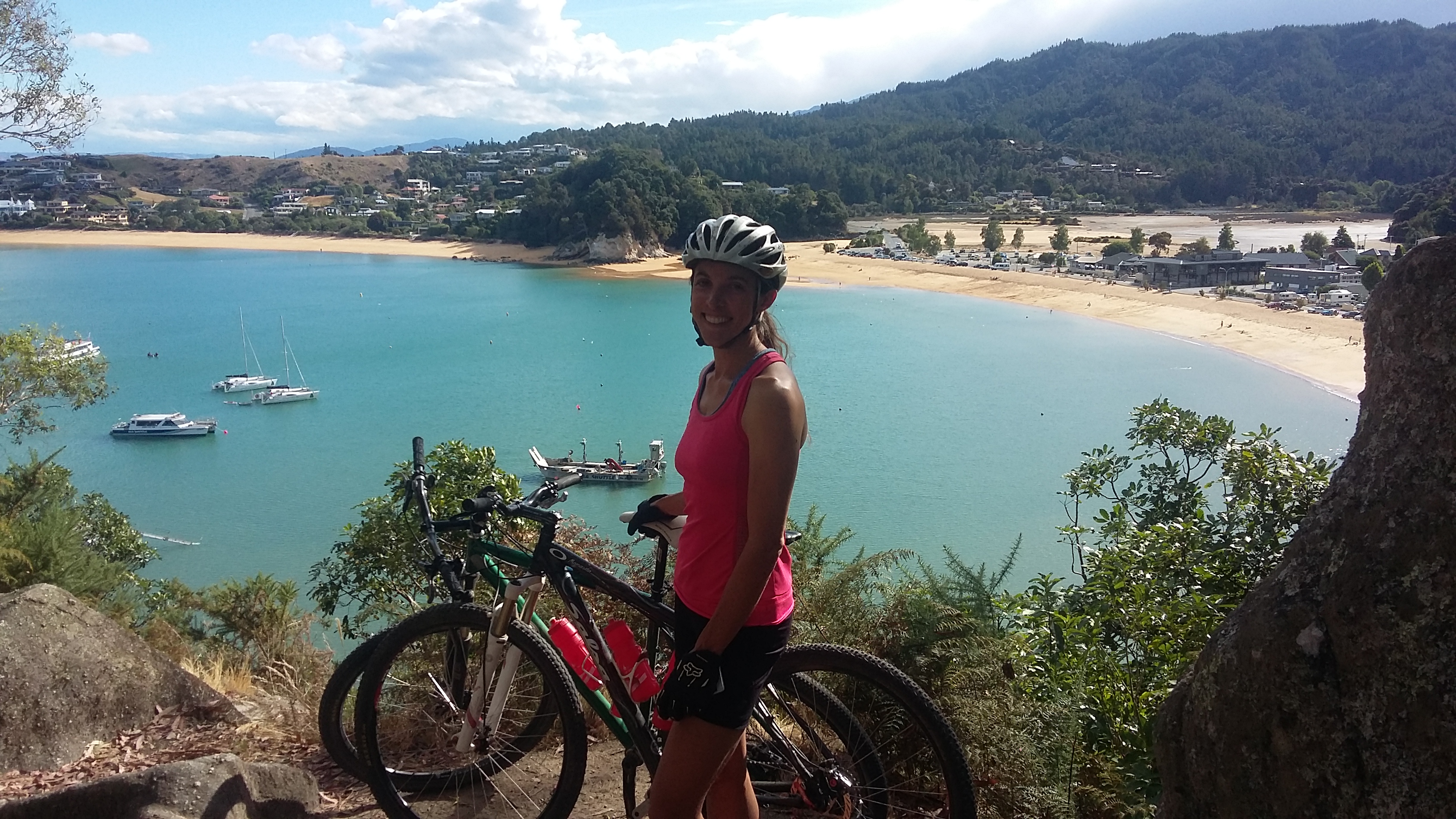 We spent Christmas and Boxing Day in Nelson, a perfect day sail – broad-reaching up and into the Marina. Everything was closed so we went to volunteer at a homeless shelter and ended up meeting some great people and sharing food because there were too many volunteers! 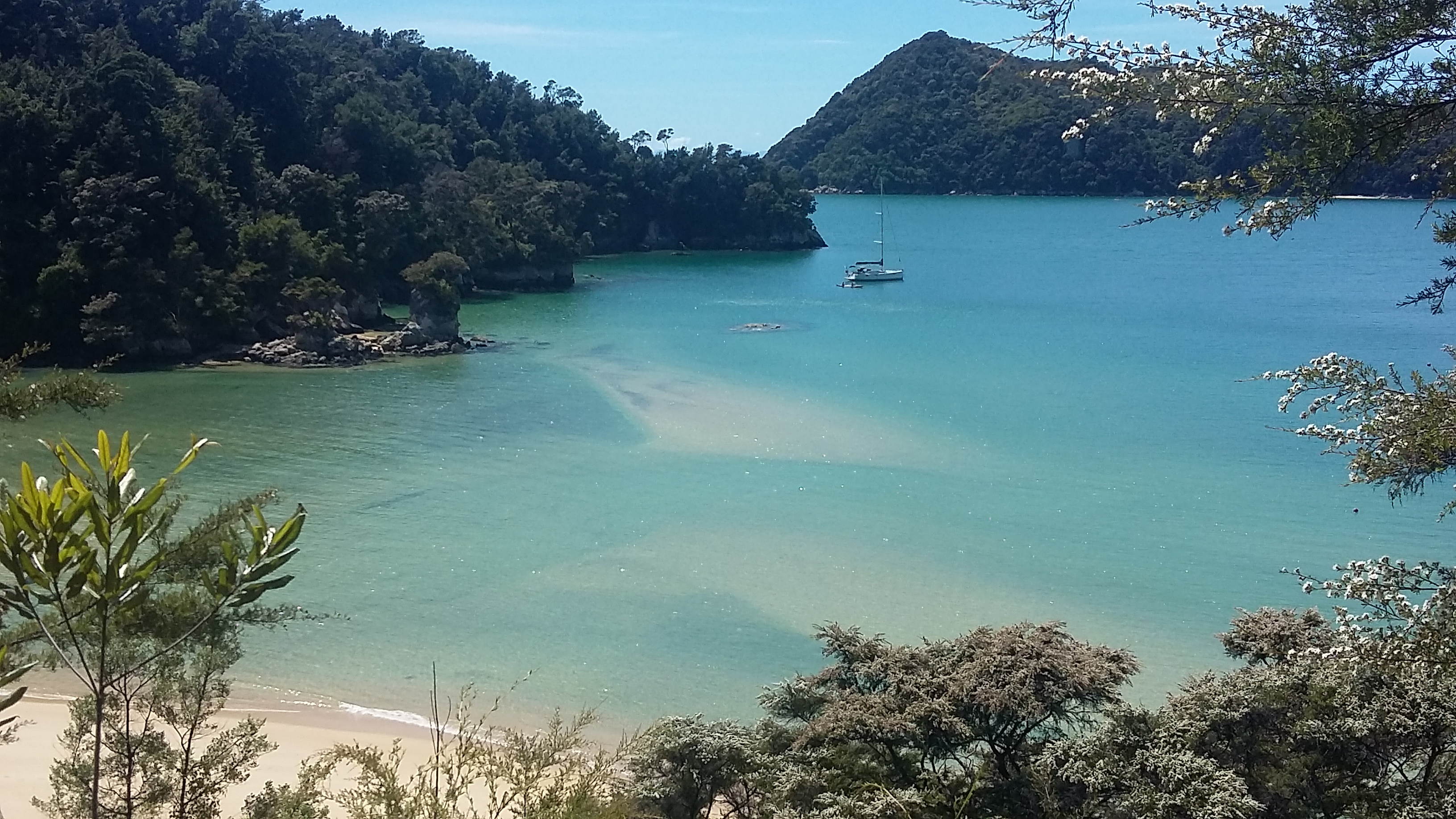 The next three weeks was spent in the beautiful Marlborough Sounds where we used club moorings because it’s just too deep to anchor. The weather is difficult to predict due to the dramatic contours of the land making it difficult sailing and the constant changing conditions meant we had to keep moving.

My favourite place in Marlborough Sounds was Queen Charlotte Sound as it is in the most natural and original state – almost completely as it was when Captain Cook sailed in in the 1700’s.

We continued our journey North early one morning across Cook Strait – a good beam reach sitting on 8 knots. We hit a huge lump of floating kelp so I jumped overboard in the middle of Cook Strait – the kelp was like huge strands of rope caught in the sail drive and rudder and I finally got it to release.

There are many horror stories about sailing the Wairarapa Coast (the lower coast line of the Eastern part of the North island) because of its rocky lee shore and nowhere to hide in bad weather. We were initially feeling lucky and sailing well, however, as we neared Cape Kidnappers we heard a forecast and realised our chances of clearing East Cape were not good. We kept going but it proved to be difficult as we were tracking off course as the wind clocked around. Our course was actually falling off towards South America. The wind was extremely strong accompanied by a huge swell but our Hanse was still handling it well.

At some point that night as conditions got worse we decided to bail out and headed into Napier. This was some of the best sailing of the trip. We were on a broad reach all night doing 13 knots down the front of a big following sea. The strong Northerly winds meant we were trapped in Napier for 10 days but what a place to be stuck! We did vineyard tours on our mountain bikes, took in the Art Décor architecture and visited relatives – Napier has such a cool small town vibe.

We then headed North past the Mahia Peninsula, had a night in Gisborne and made for East Cape. By this stage, we had just enough fuel for emergencies so we sailed in to Tauranga. It was a relief to feel like we were on the home stretch to Auckland, now surrounded by scattered islands, sandy beaches, and sheltered waters. Auckland’s Hauraki Gulf now felt like a big swimming pool, and we were home.’

One of the most amazing experiences we had was in the Marlborough Sounds. We were on a mooring when a huge adult whale surfaced right beside the boat, blew air then swam away. That was incredible.

We got used to seeing dolphins everywhere, every day – they were just following the boat. We paddle boarded with seals in the South Island and saw Pilot whales off the Wairarapa coast and were visited by the occasional Albatross. We experienced so much wildlife. 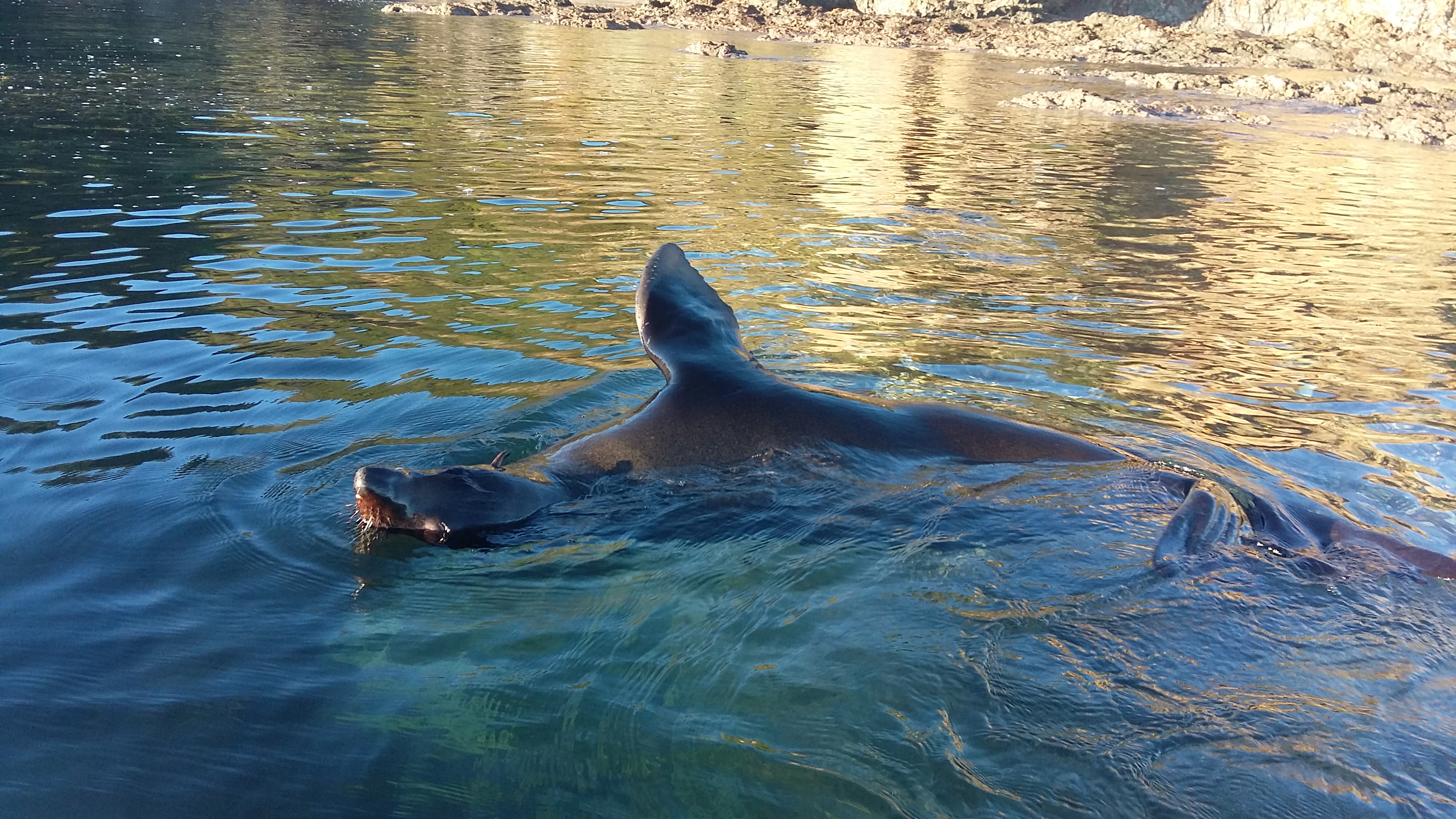 Jeremy says, ‘We tried to be as self-sufficient with food as we could so we did a lot of fishing – I even caught a King fish but when the fishing wasn’t good we foraged for cockles. Anne even became famous for her cockle fritters.

The galley is so big on the Hanse 415, we could prepare home cooked meals. And there was so much storage we didn’t have to eat dried or tinned food which made a huge difference to our trip. 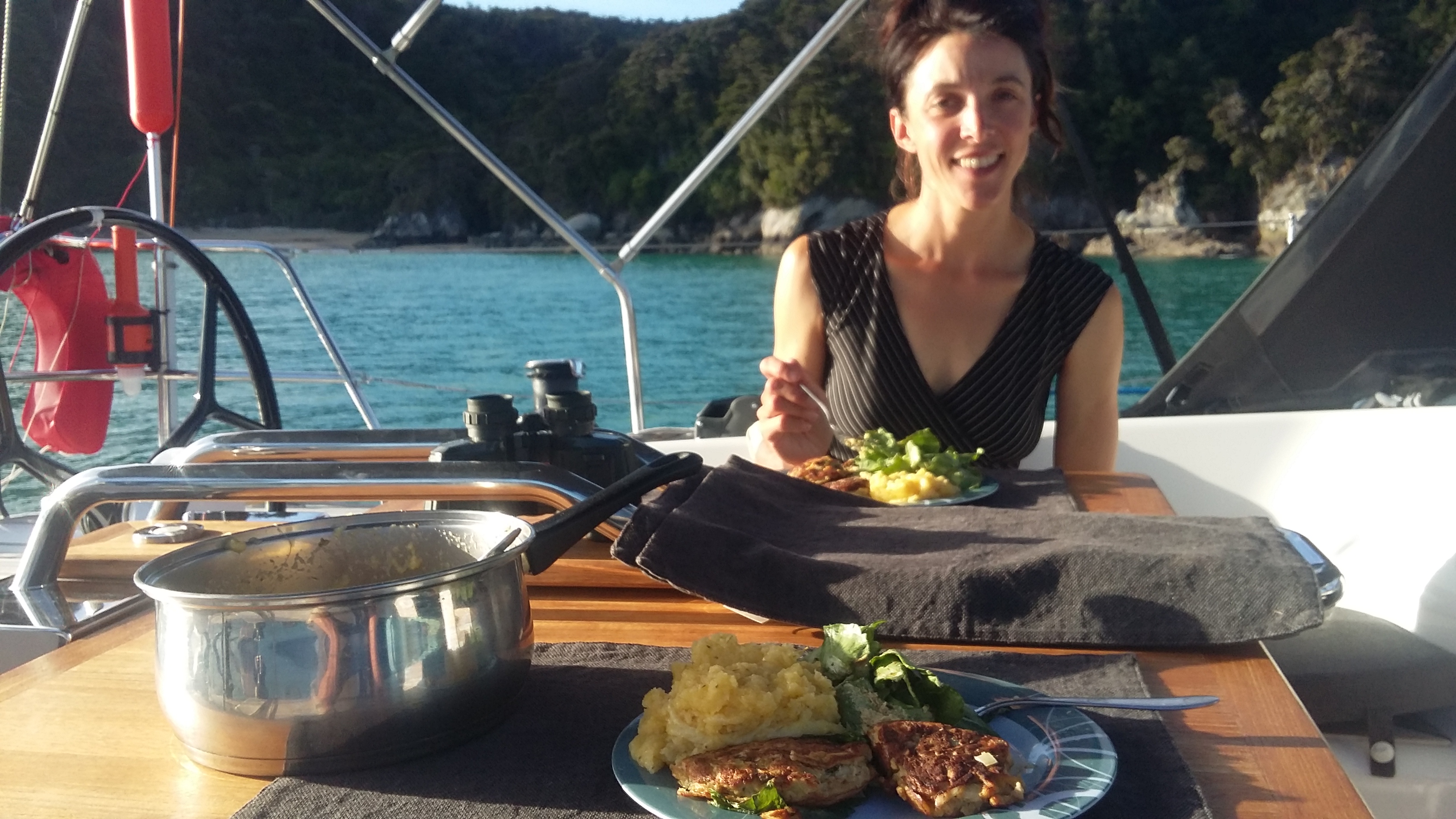 Jeremy, how did ‘Athair’ Perform Offshore?

‘Our Hanse did everything we thought she would do, there were no surprises – she performed well and with consistency.

Anne was a bit scared when we left due to the looming overnighters but it turned out well because we had trust in our Hanse off-shore, we felt safe, she handled well in all conditions and she was very comfortable.

Anne says ‘Athair’ handled better off-shore than we expected. Jeremy could handle her on his own even in the worst conditions and I felt safe on the three hourly shifts while sailing through the night which was of great comfort to me.’ 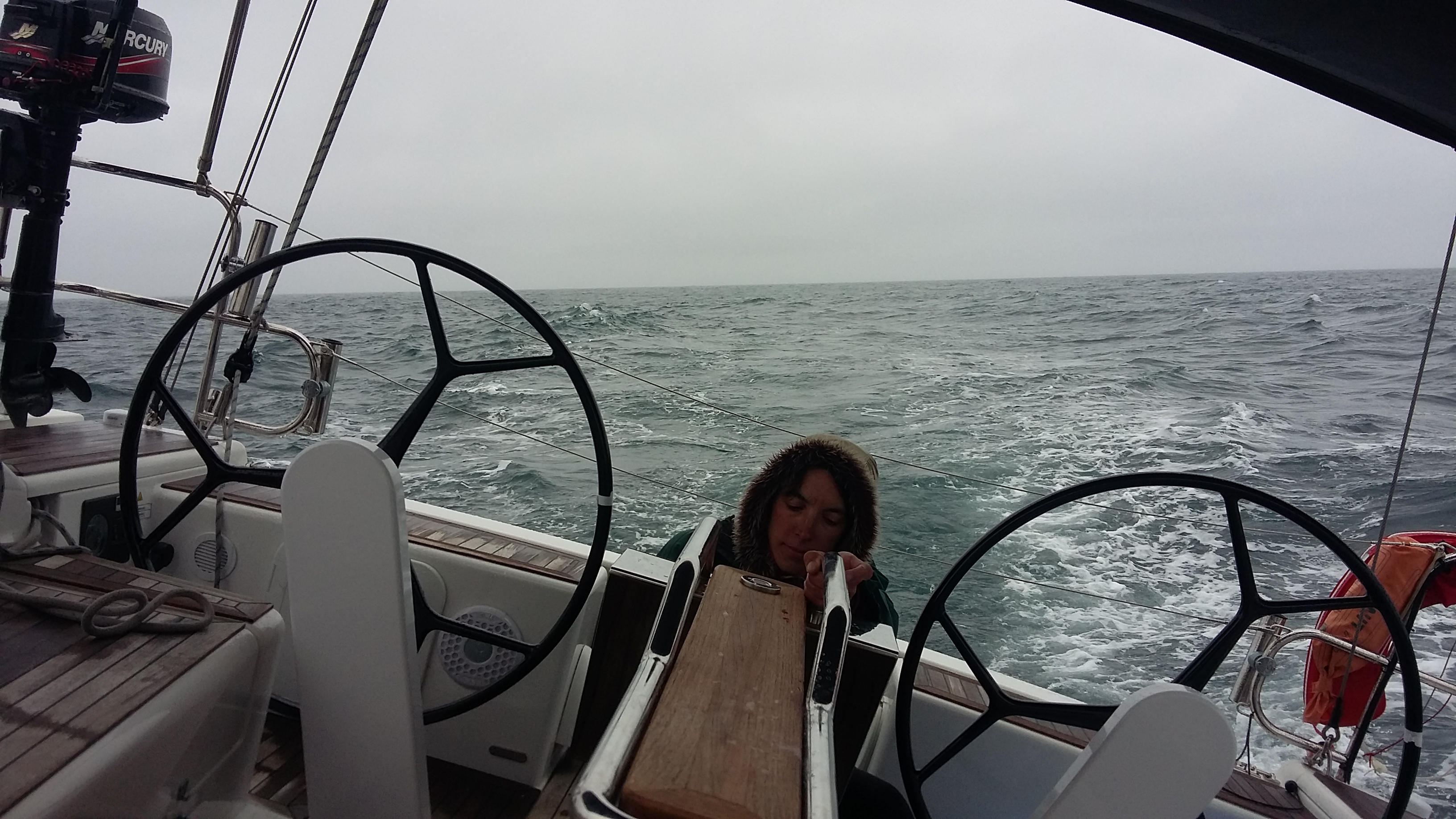