A CORPORATE PROFESSIONAL’S LOVE OF SAILING ON HANSE 385

City dweller and corporate professional, Matt Farr is one motivated Hanse owner with a strong desire to get out there and sail – cruising and competitive racing.

As a busy professional Matt has strategically organised his life to include his love of sailing on his first yacht, Hanse 385 ‘Lorelei’.

He says, ‘I’ve made sure that logistically, I can fit owning a yacht and sailing into my life which means having it close by for easy access to get out on the water in under an hour.  And I have the perfect solution – a pen at the Cruising Yacht Club of Australia (CYCA), located on the shores of the stunning Sydney Harbour a stones’ throw from work and home for both my partner Ryan, and me’. 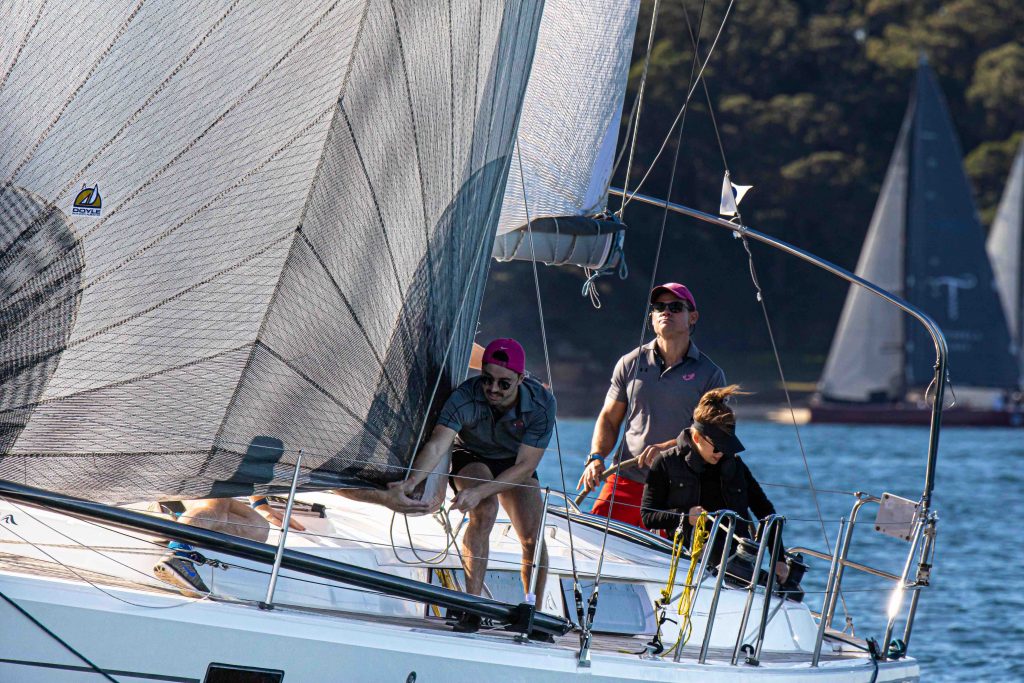 What was your experience before you bought her?

Growing up in Townsville, QLD, Matt was introduced to sailing at the young age of 2.  He remembers his Dad building a Hartley 14 from plywood in the backyard and then came the obligatory trailer sailor that the family hung out on through his teenage years.  Sailing around the magnificent waterways of Magnetic Island in the Coral Sea just a hop skip and a jump away from the Great Barrier Reef was just the norm – very cool indeed.

Since leaving home, Matt has continued to maintain his passion for sailing, racing Elliot 7’s in Victoria including 3 nationals, sailing on Lake Burleigh Griffin in the ACT and racing on Flying Tigers in Sydney.

He says, ‘after all my experience on other boats I was finally, able to buy my own.  We searched on-line and there was the Hanse – the perfect boat. 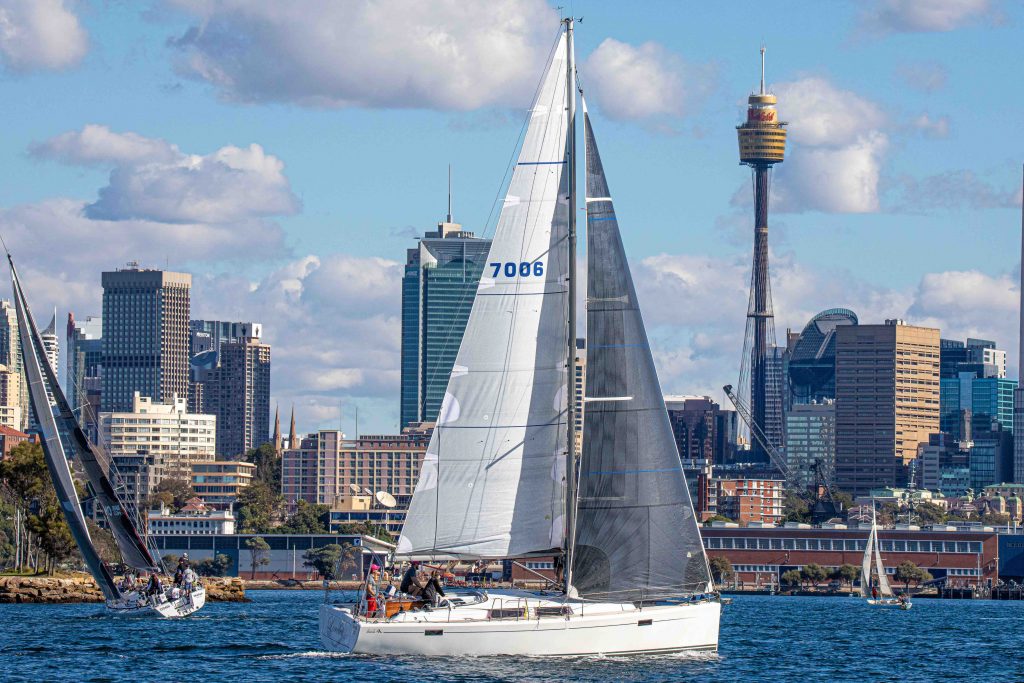 Why did you choose the Hanse 385 Matt?

‘We were initially looking at the 355 and then we heard about the new 385 – it was everything we wanted.  It hadn’t even been launched but we were certain it was the boat for us so when it became available to order a short time later, we purchased one off the plan. And it turned out to be one of the first three to arrive in Australia.

Ryan was a novice sailor – he wasn’t and still isn’t interested in competitive racing, so we needed a boat that was going to fulfill both our criteria and the Hanse 385 did just that. And she was a very sexy sporty yacht aesthetically – an added bonus.

We needed a comfortable ocean-going boat that was easy to sail two-up with enough room below to live aboard for a week or two at a time for cruising purposes. Yet it had to be fast and capable of competitive racing.

The Hanse 385 for cruising: 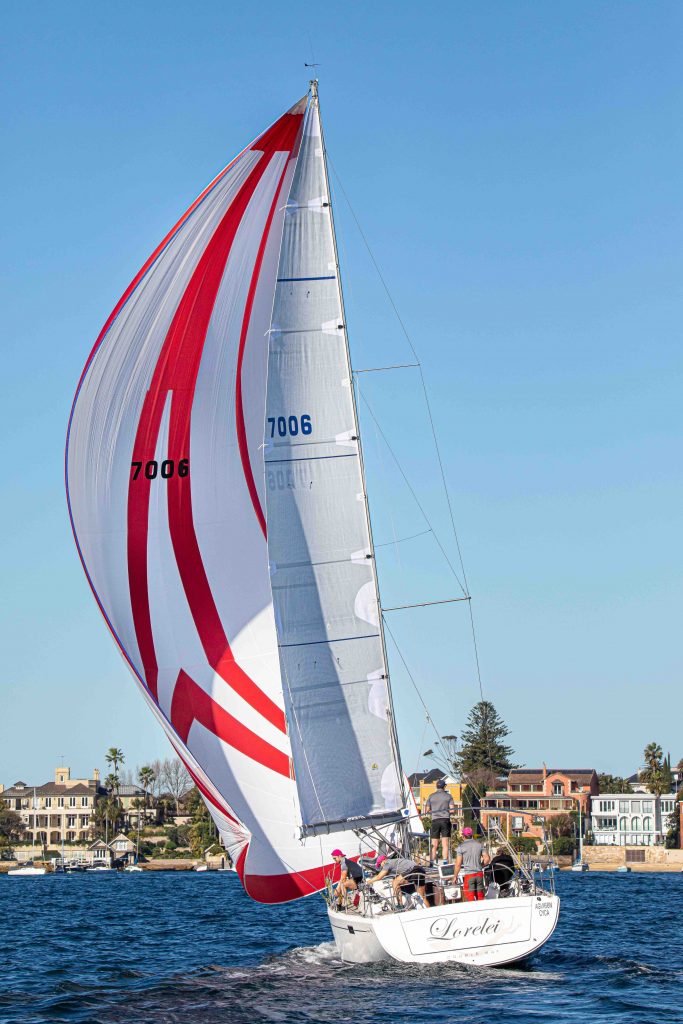 Ryan and I had big cruising plans and there were plenty of attractive features on the Hanse 385.

The twin wheels opened-up the cockpit providing more usable space and helming could be done from the gunnel.  It turns out I can helm one-handed on port or starboard tack and the wheel gives me a great feel for the rudder on the windward or the leeward side.

We liked the two-cabin version which offered a couple of unique features: 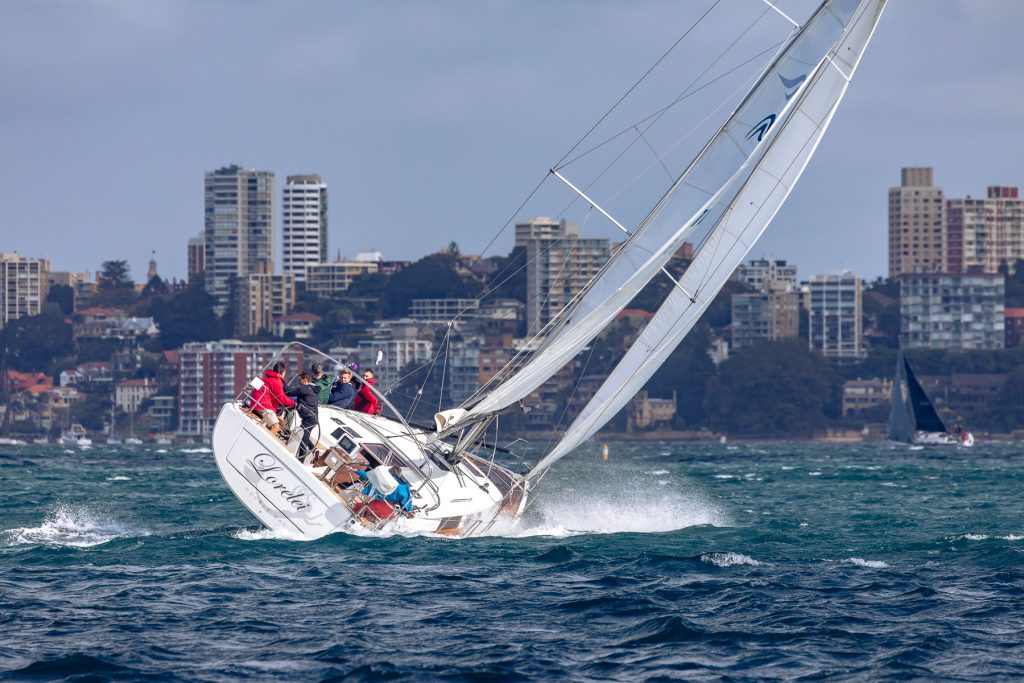 The Hanse 385 had a taller rig and bigger sail plan compared to other cruisers.  I also liked the 2m draft of the bulb keel, deep single rudder, and stiff hull construction.

After cruising for a couple of years I wanted to get back into regattas and harbour/inshore racing.  So, I spec’d Lorelei up with secondary winches – one electric had jib tracks installed on the side decks instead of the cabin top which allowed me to order a new racing jib (measured and cut) and a carbon spinnaker pole with a masthead spinnaker.

I’m happy with the modifications and she performs well.  I’m surprised at how quick we have her racing around the cans now. She is a very competitive inshore regatta racing yacht.’

Mostly we race on Sydney Harbour:

‘I like to combine my love of sailing with my desire for sport and competition and to do it on Sydney Harbour, well you just can’t beat that. 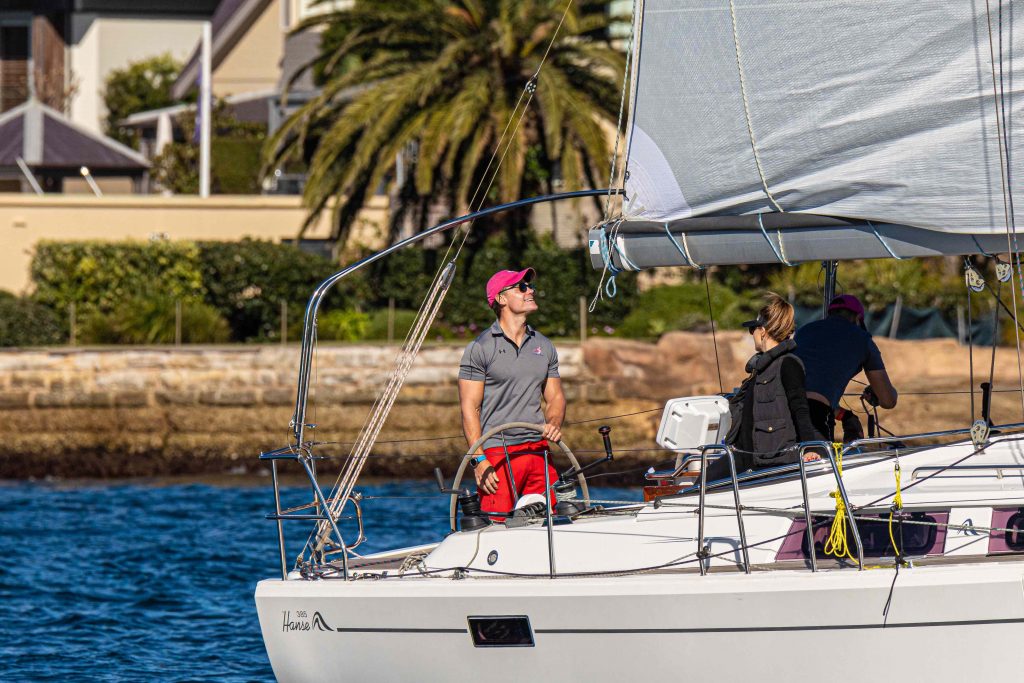 Matt says, ‘Sydney Harbour offers protection from the elements.  It’s deep so you don’t run the risk of running aground which is a real plus. It has the right natural elements and it’s a stunningly beautiful patch of water.  And with the bridge, the opera house and the city as a backdrop – sometimes I have to pinch myself’.

I’m currently sailing in the Sunday winter series at the CYCA which runs from May to July – in fact, it’s my 5th series in a row on ‘Lorelei’.  It’s casual yet quite competitive given the number of vessels – with sometimes 140 boats across different divisions.  To be able to do that in winter is amazing. Sometimes it feels like a summer day and you can’t do that anywhere else in the world in winter.

In summer, I do the Friday night twilights out of the Royal Sydney Yacht Squadron at Kirribilli. I love being able to knock off work at normal time and within 30 mins I’m at the club on the boat with a group of friends. It’s all about lifestyle.

All races on ‘Lorelei’ have the same solid crew.  I have eight, two with a sailing background. The others are friends who were new to sailing – I’ve trained them up and they have learned a lot. We now race competitively with the spinnaker division in the winter series which we won this year.

Another thing I enjoy are regattas, so I do a few here and there. It mixes things up and it’s another way of competing.’

The social side of sailing? 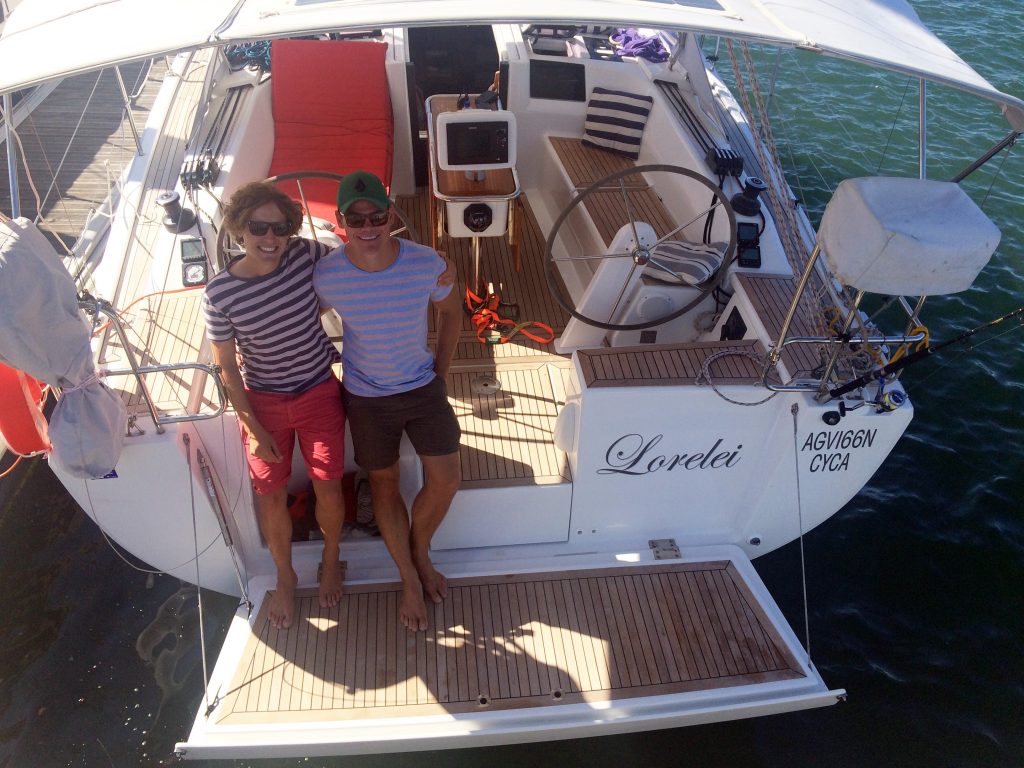 ‘Of course, the socialising is all part of it.  Even though Ryan doesn’t race he is still involved socially and meets us afterward at the club.

For me, racing, meeting for a drink and a chat about sailing closes out the work week and starts the weekend on a high.  It’s all part of the lifestyle,’ says Matt. 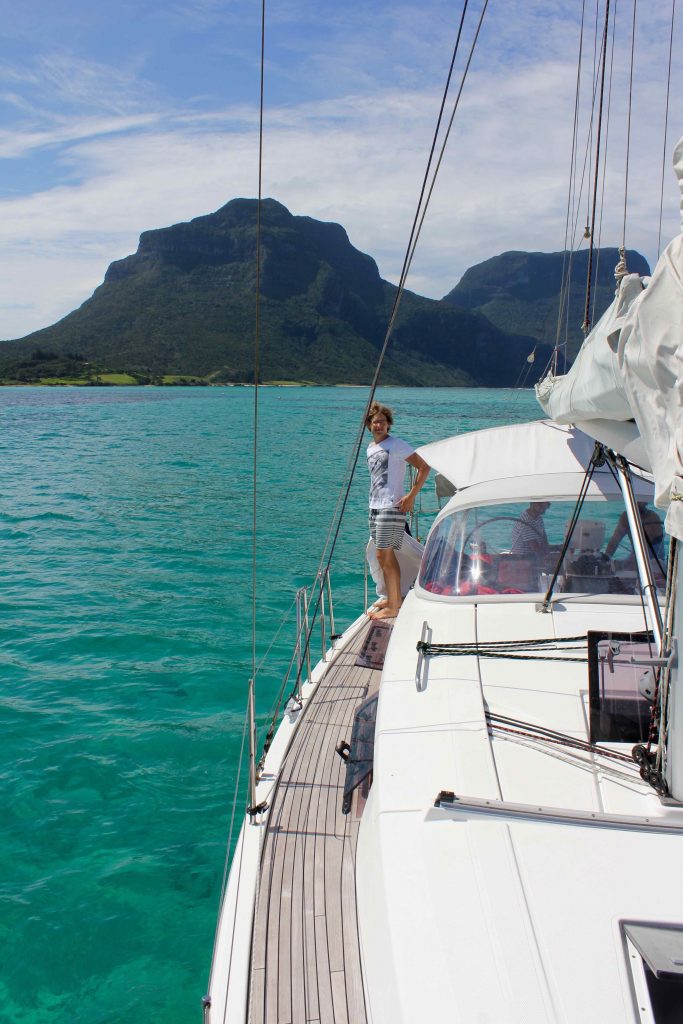 Matt says, ‘Ryan and I love to use our Hanse for cruising – she is just so well set up for it.  We have plenty of water toys and a good tender for exploring.  Being out there in nature – swimming, bushwalking and cruising the waterways is our thing.

We spend up to two weeks away every summer. We’ve been to Lord Howe, Port Stephens where we cruise in-shore around the beautiful beaches, Port Macquarie, South to Jarvis bay which is brimming with natural beauty and Lake Macquarie. And we have many more plans for the future.

We do smaller trips every opportunity we get – mini Summer getaways on Sydney Harbour and a little further north of Sydney to Pittwater, just a few hours sail away for overnighters or weekends away.’

‘Yes, I maintain her extremely well – it’s very important to have a sea-worthy vessel for safety reasons so when we go off-shore we know everything is in good working order.

I book her with Windcraft Yachts on an annual basis to be slipped, antifouled and the hull fittings and rigging are checked.

I have a full-length canvas cover that is kept on her whenever she is not being used.  It keeps the hot Australian sun off the gel coat and the beautiful teak deck.  Once you get used to putting the cover on it becomes routine – it takes about 10 minutes and it’s well worth it.’ 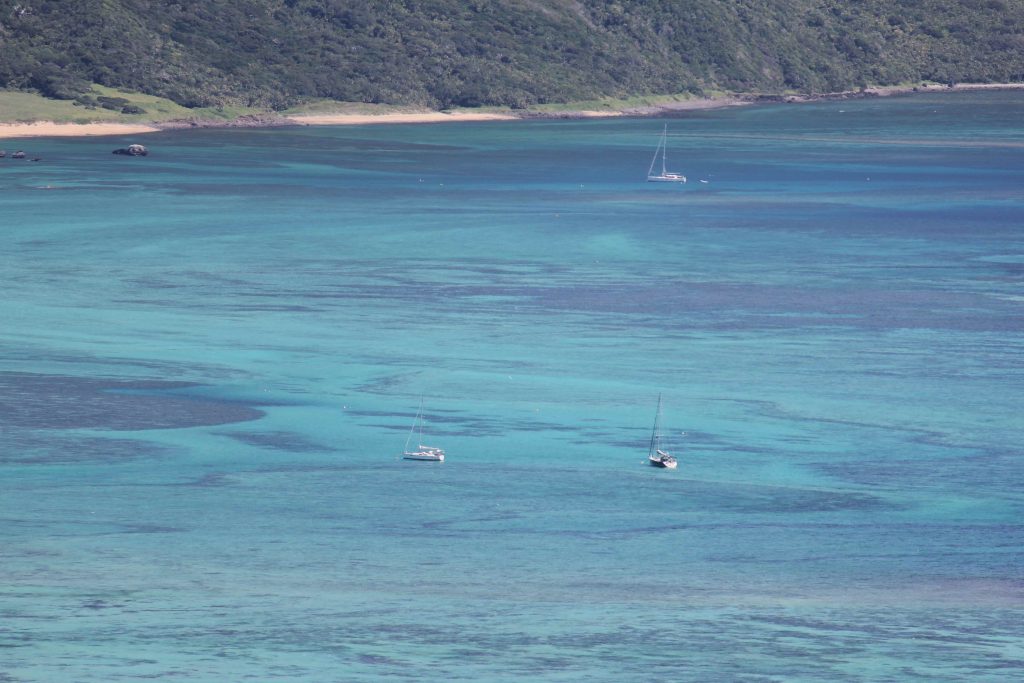 ‘I take ‘Lorelei’ to Windcraft Yachts in Pittwater annually because I get the type of service that I won’t get anywhere else in Sydney.   They have always gone the extra mile to put a personal touch on their services.  They offer a fully integrated servicing model which means I don’t have to organise a thing – they do it all.  I don’t have to worry about my boat being on the handstand because they are there to look after it – I have full trust in the team to take care of her.’

Your favourite adventure so far?

‘I will never forget seeing Lord Howe Island on the cover of the National Geographic magazine as a 10-year-old boy.  I knew then that one day I would sail my own boat to Lord Howe and I now have!

As soon as I bought Lorelei, I started planning the trip – when to go and what to do.  Moorings in the lagoon are limited and in high demand, because you can’t anchor due to the world heritage status.  We needed a contingency plan for arrival because you can only enter during the day on a calm high tide so there is only one window per day.  You need a quality anchor and enough chain to anchor off the island if you need to wait it out or hove to for 24 hours or more.

About a day out from Sydney, we saw a pod of about 200 dolphins go past the boat during a glass out.  We had never seen anything like it, it was breathtaking.

We got there in good time in just under three days and were lucky with our arrival – just on the high tide at 6.00 am as the sun was rising.  We got clearance to enter and received an escort from the water police to a mooring with tender access to the beach where we stayed for 10 days – it was paradise. We did all the bush walks, climbed Mt Gower, Lidbird and just enjoyed the natural beauty of the island which was absolutely spectacular.

We had a great sail home – heading south for Port Macquarie, we spinnaker sailed for 24 hours and when the wind came around to the south, we were on a close reach for next 24. We were surprised what a fast trip it was – 48 hours to get to Port Macquarie. It was great fun!

It’s the best trip we have done, and my childhood dream became a reality on Lorelei.’

The story behind the name:

You have to love the mythological name ‘Lorelei’, meaning siren or mermaid.  Matt says, ‘Ryan and I had heard about a place called Lorelei Rock on the Rhine river in Germany.  It goes that if you didn’t show her respect, she would call the sailors into the rock.  If you showed respect, she would provide a safe passage past. We really liked that story and the link to Germany where Hanses are made, so decided that we would name her Lorelei’.

‘Having Lorelei so close to home and work has been a blessing.  She is a big part of our lives and that means we use her every chance we get.

In fact, I use her as a stress relief, it’s a great way to unwind. As soon as I’m on-board I switch off from the corporate world and that’s what it’s all about’, Matt says. 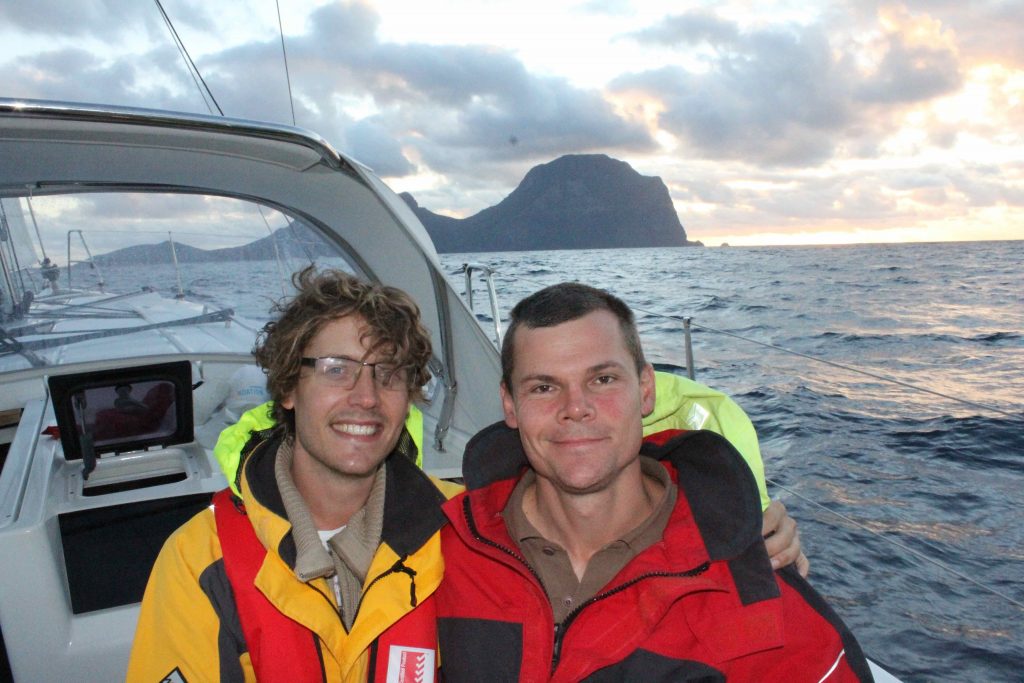